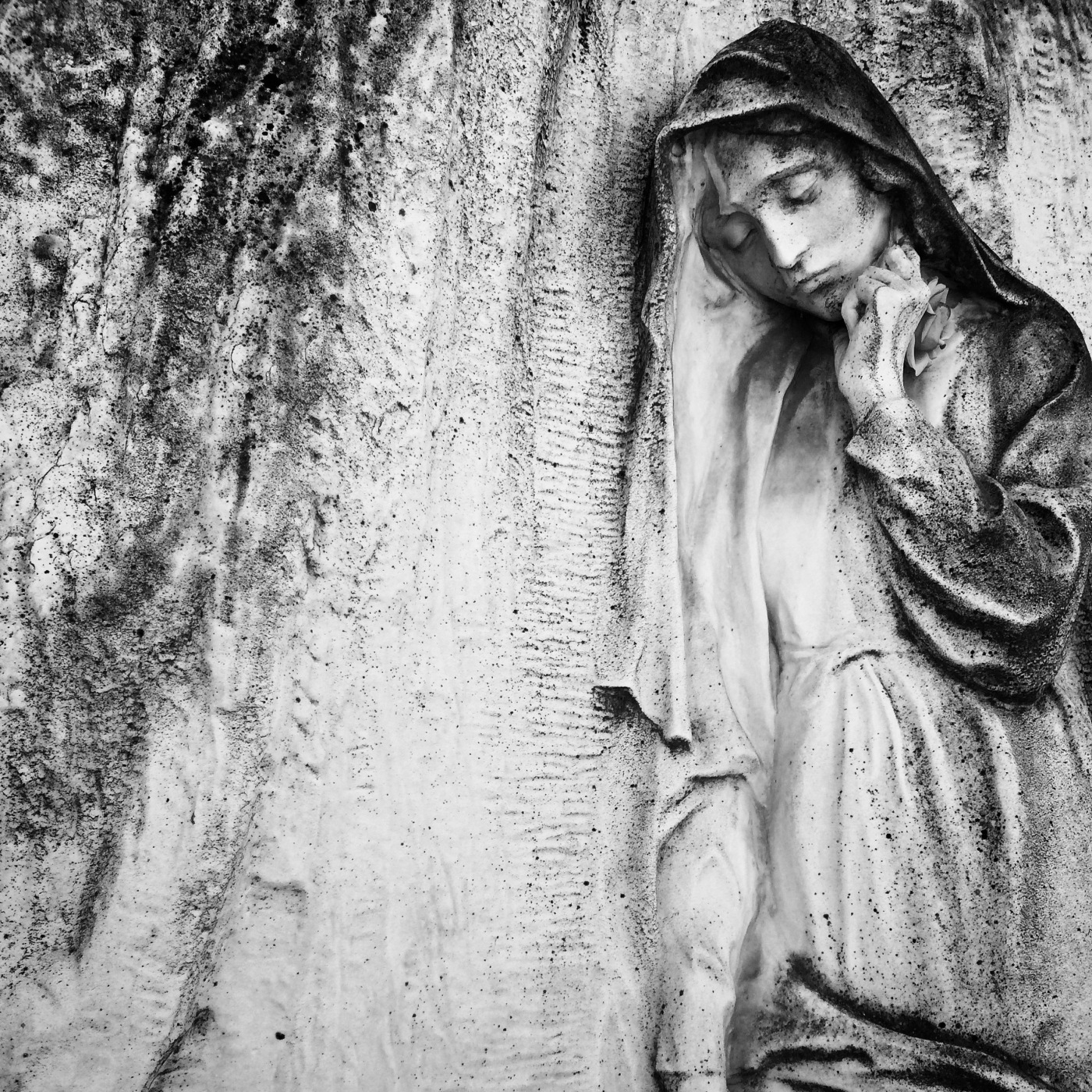 I’ve been to Venice before, but this is the first time I made my way to the cemetery island, known locally as Cimitero di San Michele. Like in so many other places in the 19th century, cemeteries were moved out of city centres, which in Venice meant moving the cemetery to a former prison island. Even today, from the outside, if you didn’t know any better, you might think it was some kind of low-level security prison, with it’s high brick walls surrounding the entire island. However, I like to think that it’s more to keep the local residents at peace from all the tourist hubbub that surrounds it in the lagoon. In any event, after a few false starts in the morning I finally made my way to the island, getting off the water bus with just a handful of people.

After making my way past the main gate I had two choices ahead of me – go left to see what was the former monastery, or go right to see the tombs and monuments. As I had no idea what was what when I first arrived, I went right. Initially there is a large semi-circle of family tombs, which look well-maintained from the outside, but that are quite dilapidated when one peers in. Beyond that is the cemetery proper. The centre of the cemetery is where most of the graves are, and they are very recent (the oldest graves I saw were from the late 1990s, but most were much newer than that). Row after row of tightly packed graves are there, every single one with real or plastic flowers. There were plenty of people there too, to clean the graves and lay new

flowers. This main section is surrounded by walls, each covered with very old family monuments. Most of these are simple gravestones embedded in the wall, but quite a few have statues in relief coming out of the stone (with such limited space full-size statues would not fit here). I arrived around 10:30 in the morning and the north and west walls were in full sun. The south was was in shade, and the eastern wall was in partial sun. Unlike the porticos and galleries of the other cemeteries I’ve been to, these were fully exposed to the elements which meant that 1) the tombs were quite clean – no dust, no moss, no mold, and 2) the light was quite harsh – which made things a bit challenging for photography, which I’ll get to later. Outside of these long walls were the mausoleums, full of tombs and flowers.

In any event, when I arrived here mid-morning, the entire cemetery was a beehive of activity. There were scores of gardeners mowing the grass, or raking leaves, so doing some other type of construction/digging/restorative work, in addition to all the mourners there visiting and tending to graves. I’ve never seen so many people (non-tourist) in a cemetery before. It made me very aware of being a tourist there and for the first hour or so I did not take any photos out of respect to everyone there (which is, of course, the official policy of the cemetery). However, after a while I noticed something strange. It was quiet! The only sound was that of insects and birds, and very distantly, of water lapping the distance. All those people who were there when I first arrived had disappeared. That’s when I realized it was noon – I guess everyone was off for lunch. Then, I felt it was okay to take photos of some of the older monuments (I don’t shoot newer monuments out of respect for recent burials/mourners).

San Michele doesn’t have grand monuments like those of Monumentale or Staglieno, but it is still a very interesting cemetery to explore. The section I liked best was the Protestant section, which was also sad because it is so neglected (save for 6 men who were there raking leaves when I first arrived there). There are a lot of broken graves/stones, as well as faded stones losing a lot of their lettering (same as in the old monastery section). The languages range from English and Italian, to German and French (and possibly Latvian?) Quite a number of graves are of sailors who perished at sea/while in Venice, and thus buried here.The only downside to this section was that with its long grass it was quite the haven for mosquitos and I got bit many times over while I explored it.

Quality of Monuments: Good. There are some statues/reliefs here that are quite interesting, although the quality is not as high as in other places. As most “residents” here get disinterred every 10-12 years, most of the graves in this cemetery are new, so it’s only the older sections that tend to have more sculpture and/or be more grandiose. The modern gravestones follow very much in the Italian tradition and feature a photo of the deceased on the stone. As I’ve seen these photographs across a variety of stones/climates/cemeteries, I can say that the black and white photos seem to last much better than colour ones (even hand-coloured black and white photos from the 1860s are better than colour photos from the 1970s). I’d really like to know the processes that were used (i.e. what types of photos were put on the stones – tintypes? paper? it’s hard to tell at times) for these miniature portraits on the stones.

The Cemetery Grounds: Interesting. Despite the fact that the cemetery takes up the entire island, it’s fairly easy to get around, and most sections are easily accessible for those with mobility issues (or not). There are ramps that allow for strollers, wheelchairs, even vehicles, to get up and down steps. Personally I found the older, less-maintained sections more visually interesting, but next time I’ll have to remember to bring the mosquito repellent!

Visitors: There are some tourists there, but the majority of people are mourners and/or maintenance staff. It is very much a working cemetery and needs to be treated as such. As I left a funeral procession had come in, the coffin led by a priest in vestments and followed by many mourners in black. It’s just something to be aware of.

Photographer notes: The majority of this cemetery is out in the open so the light can be quite harsh. However, in the cloistered areas it can be quite dim. I was happy to have ISO 50 film in one camera and 800 in the other to cover both situations. I cannot see any way or reason why tripods would be allowed here. Even though I missed my early start time, I have a feeling that if you get to the cemetery right when it opens (7:30 a.m.) you may have better light and/or fewer people. The same could be said for late afternoon.

Overall Satisfaction: Good. This is a really interesting cemetery to visit. I wish I had gone earlier but part of me is glad that I was there at noon when everything was evenly lit and no one was around. Definitely a nice calm oasis from the frenzy of Venice.