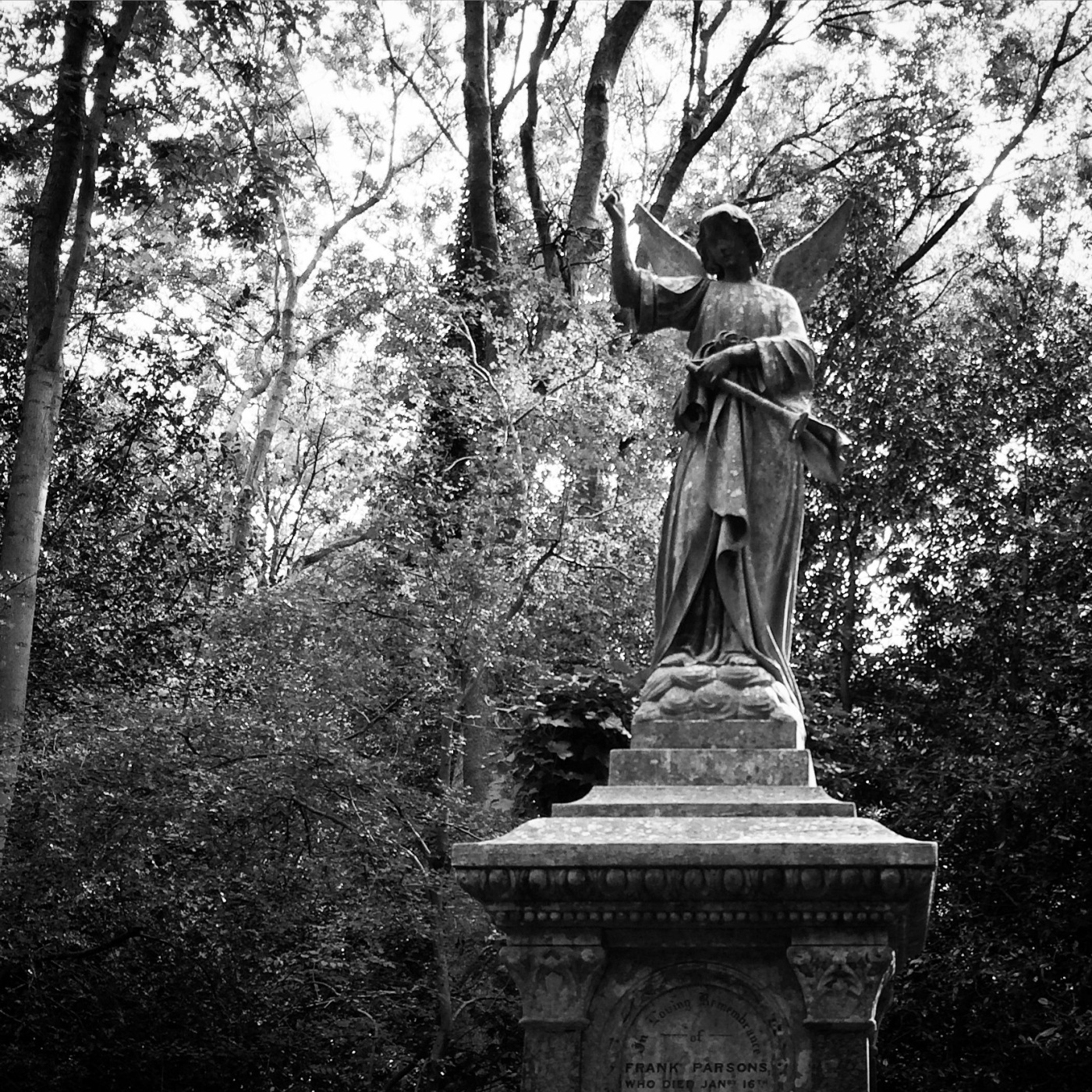 I know, I know. Highgate Cemetery is one cemetery separated by a road, and entrance/tour fees. However, as they are treated separately – one is by guided tour, one is open to explore – I want to consider them separately as well. I also find that when people speak of Highgate, they speak of the monuments in both sections interchangeably, and that leads to some confusion – many sites and books go back and forth between them and I personally find it confusing. And now, having been to both, they do look and feel different, so I think it’s not a bad thing to consider them different cemeteries.

After my tour of the West cemetery and buying a few books from them (lots of good stuff there) I headed over to the East cemetery (free if you’ve done the tour of Highgate West, 4 pounds if you haven’t). I did as I normally do and avoided the main path straight into the cemetery (I’m not sure why I do this – save the best for last maybe). So I headed right which basically had me going downhill through a wonderland of headstones completely covered in ivy under the shaded light of the trees all around them. It was beautiful and I wondered what was there, under all that ivy – however looking at many of the headstones that were visible it was clear that a lot of inscriptions had faded away or fallen off. It was really nice though, walking through the paths, occasionally coming across a stone angel here and there, just my eyes and feet guiding me throughout the area. Eventually you come to the bottom of the cemetery, which is basically an open meadow. So then I started climbing back up the hill, eventually running into numbers of tourists. Sure enough, I ended up in front of Karl Marx’s tomb. In pictures I’ve seen online I’m not a huge fan of the tomb, but being there in person it was quite imposing and difficult to look away from. After that, I spent time photographing the many statues in this area. It’s very clear that the top (north) section is much more maintained, as is this is where most of the famous graves are. The further away you get from this section, the more overgrown everything gets.

Quality of Monuments: Good. A number of interesting statues/monuments, mostly stone, are in the main section of the cemetery. There are a lot of angels but many of them (and this is true at a number of cemeteries) have parts broken off – usually hands and/or arms, but it could also be things like weather wearing down a face.

Cemetery Grounds: Varied. As mentioned, the top part of the cemetery is well maintained – the grass is cut and there aren’s so many trees. All of the headstones are visible. As you walk down the hill it gets progressively more overgrown (managed neglect?) which is very appealling also. If exploring off path it can be a bit dicey with soft ground and uneven monuments. In wet or icy weather those slopes would be very slippery I imagine.

Visitors: Quite a few. Many who do the tours at the West cemetery come here before or after their tour. Plus, some people who don’t want to pay 12 pounds for the West, pay a third of that to visit the East. I didn’t see any mourners here but many graves do have fresh flowers on them (including Marx’s).

Photographer notes: Tripods are allowed here but I think they would be awkward in the slope sections, although useful with the limited light in some places. The downhill section would be a beautiful place for infrared work.

Location: Highgate. Take the tube to Archway station, walk up the hill, cross over Waterlow Park, and it will be directly to your left as you leave the park (basically directly across from Highgate West).

*Note: My iPhone decided it had no more memory for photos while I was here, and despite deleting a whole bunch, it still would not allow me to take photos. So the photo above is from the West cemetery, as I did not want to leave this post without a single photo. When I finish developing my photos I’ll replace the one above. So at the moment, no Marx, no Adams, nothing.