Site 30: The Byakkotai Cemetery on Iimoriyama 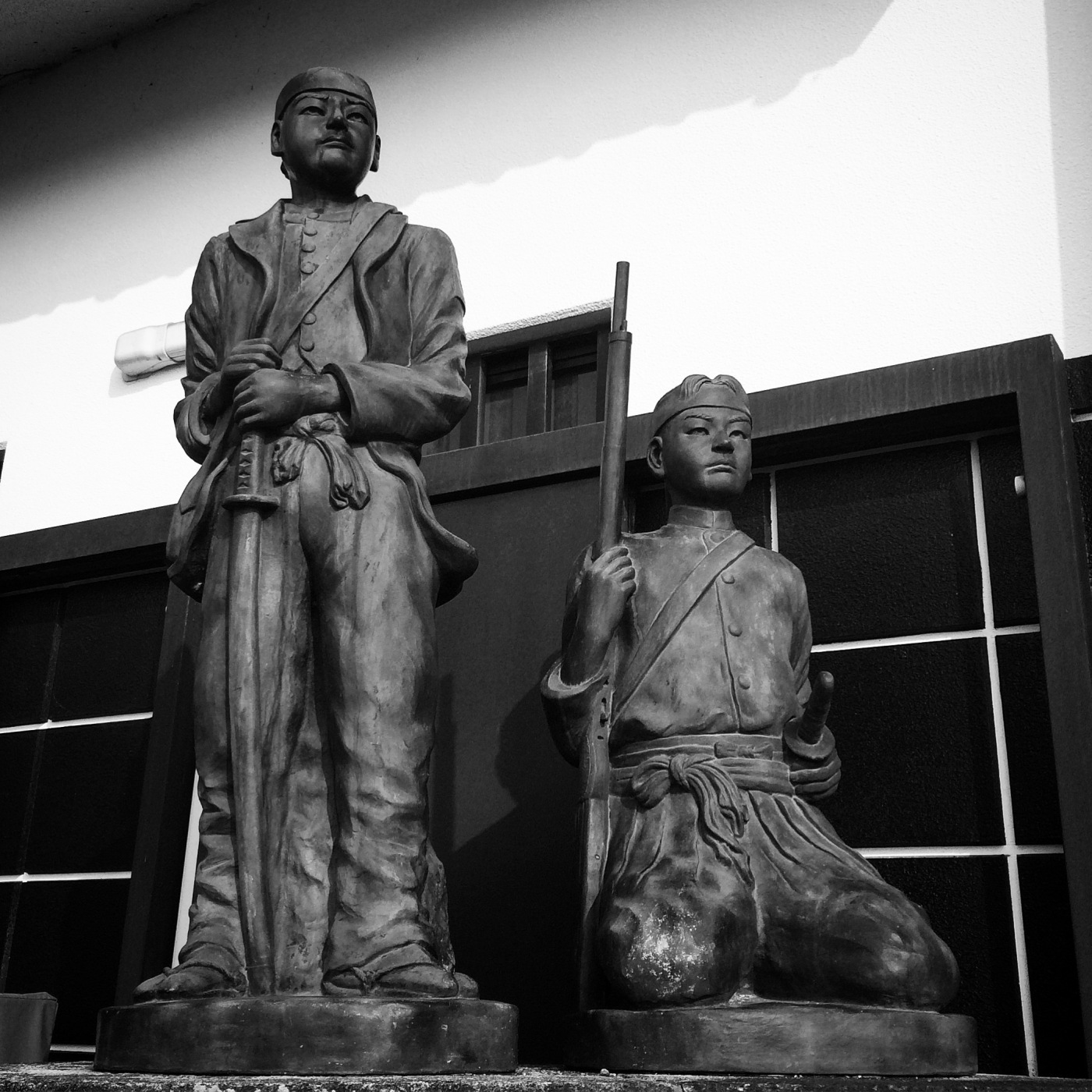 In the late 1860s there was a massive civil war in Japan, called the Boshin War, in which supporters of the Shogunate (military commanders who effectively ruled Japan, and had, up to that point, had had an isolationist policy) and the supporters of the emperor, who wanted to re-establish his rule (and get rid of the foreigners who were helping to modernize Japan at that time). There were battles all over Japan, but eventually the imperial forces were victorious over most of Japan, with only the Northern Coalition, headed by the Aizu clan (in what is now Fukushima) holding out. The Battle of Aizu took place in the city of what is now Aizu-Wakamatsu in October of 1868. The military might of the Aizu force at this time was about 5000 strong, and one of the fighting units was known as the White Tiger force (Byakkotai), which was one of four divisions that consisted of the under-18s, the others three divisions being the 18-35 year old samurai, the 35-50 year old samurai, and the over-50s. Here, the Byakkotai were the young, 16-17 year-old teenage sons of samurai warriors, and their unit consisted of about 300 young fighters. During the Battle of Aizu, a small contingent of 20 fighters got separated from the main group. They were on Iimori-yama, a hill that overlooked the town and castle. At that moment in time, the city was burning from the battle, but from their viewpoint, these young warriors thought that it was the castle (Tsuruga-jo) and that their army had been defeated. Believing that their lord and families had met their end, they (after some debate) committed seppuku (ritual suicide) with all but one (the youngest, at 14) succeeding.

However, as they had been on the losing side of the battle, their remains were left on the mountainside, as they were not allowed proper burial rights by the imperial forces. After three months, a villager secretly carried the bodies to Myokoku temple and had them buried there. Later, the Byakkotai were allowed to have their own monuments back on the mountain, and the 19 graves that are currently there date from 1890. Part of the ashes of the boy who survived (Iinuma Sadakichi (飯沼貞吉, 1854-1931)) are also interred here, and there are a further 31 memorials to the other young men of this same force who died in subsequent battles.

This story of ultimate sacrifice to one’s cause and commander appealed to pre-WWII fascists, such as Mussolini, who, in 1928, put up an ancient pillar from Pompeii there in support of the young men who had committed suicide. A German diplomat in 1935 also had a plaque installed there, but it (and the swastikas that adorned it) was replaced with an iron cross by American soldiers after WWII. Both monuments still stand there today.

The gravesite is a steep climb up the mountain, but you can forgo most of the steps and take a “people mover” (an escalator with no stairs – just kind of a rubber mat) if you are willing to pay a bit of money for the privilege (which I did). Once you get to the top there are still two more staircases to climb, but then you are in this massive wooded area and in a very calm and serene place surrounded by tall, stately trees. Before climbing the last two staircases you can buy some incense if you want to lay some down for the boys. The main memorial which faces you as you walk towards it, is for the 19 boys who died. To the right side are 31 gravestones to the other young boys who died. Of course, I remember seeing the pillar and maybe the cross left by the fascists, but for whatever reason, I did not photograph them. The memorial is to the left of the final staircase, but if you go to the right you will find another, larger cemetery. The memorials at the top of the hill seem older, while as you go further down the mountain the monuments are clearly newer. Similarly, if you take a left at the bottom of the two staircases (or even further down, if you decide you want the stairmaster workout, there is an old shrine, and Sazaedo Temple, which is an unusual 3-story hexagonal-shaped wooden building from 1796. It is one of the oldest (if not the oldest) remaining buildings from the Edo era. It has a really unusual design and you can go up to the top following a spiral ramp. Unfortunately I was not able to do so as I was under time pressure to go catch the bus (which only ran every 30 minutes) but it definitely was worthy of more time and exploration.

I really enjoyed visiting this site and wish I had had more time in Aizu-Wakamatsu, which is a interesting town with a lot of fascinating history. I had planned on seeing the gravesite of the Aizu lords, about 2 km south of Iimoriyama, but hadn’t anticipated how long it would take to get there, or how difficult. Actually, it’s not that difficult, but there are several deep and uneven staircases through a beautiful forest to get up to the gravesite, which is at least a 15-20 minute walk one way. As I only had 30 minutes (needed the bus to catch my train back to Tokyo) I knew I’d never make it. That was also due to being unprepared – I had the wrong kind of shoes for hiking, and I definitely would have needed a hiking pole to help me with those stairs, as my bad knees never would have been able to handle the steep descent on the way back. The site (on the map) looks amazing, and would have been a great walk through the old growth forest, but I definitely would recommend a couple of hours to deal with it so you are not rushed for time. In any event, I definitely plan on coming back here to explore further. The people of Aizu-Wakamatsu were super friendly and there’s just something about exploring these hidden corners of Japan that are so rewarding.

“No matter how many people wash the stones with their
tears, these names will never vanish from the world.”

-poem by Matsudaira Katamori on a memorial stone at the site

Quality of Monuments: Like many military monuments, the memorials to these fallen soldiers are all identical and have a power in their uniformity. There are also other monuments (as mentioned above) and statues there as well. Being up on a mountain in a forest means that some of the stones have had the writing fade away, and/or covered in moss.

Cemetery Grounds: Up on a mountain, but the path up is a concrete staircase (or people mover) but most of the paths are dirt, so be prepared in (or just after) inclement weather. The tall trees stand as silent guardians over the entire cemetery, and it is an interesting place to walk around. There are some tourist sellers there, selling trinkets and the kind of foods that appeal to Japanese (but probably not most foreign tourists). The Sazaedo Temple was a revelation and I wish I had had more time to explore it, even though the site is quite small. There are also 2 museums and other shrines on the site. Although the memorial itself is free, almost everything else has a separate charge, which is kind of unfortunate. I think it would be better to have one charge to go up the mountain and visit everything (the temple, the museum, etc) as more people would be likely to do it. As it was, many of the other visitors bypassed the other paid sites, like I did.

Visitors: Overall it was not busy, but there were about 10 people up at the cemetery while I was there, in small groups of 2 or 3. I suppose it would get busy with school groups during school trip season, or with more visitors during summer.

Photographer notes: There isn’t a lot of space to back up or to secure one’s footing on a slope, so wide angle lenses would be helpful.

Location: Iimoriyama (Iimori Hill) on the east side of Aizu-Wakamatsu city. It’s about a five-minute bus ride from the train station, stop A5 if you take the red bus, H36 if taking the green one. Check the timetables to make sure you know when the next bus is coming. (The red bus goes in a clockwise direction from the station, the green bus goes counterclockwise).

Hours: Probably 24 hours, but there is unlikely to be any lighting to help you after it gets dark.