In St. Petersburg, just north of the iconic Church of the Spilled Blood, is a large park known as the Field of Mars. This park has been used  in St. Petersburg for centuries, for everything from military parades and troop inspections to parades and just regular leisure activities. However, after the February 1917 Revolution, 184 of 1382 revolutionaries were buried in this park in a mass grave. Eventually a memorial was put up for the 1917-1919 “Fighters of the Revolution.” It went through a few changes over the years, and in 1957 an eternal flame was set up for all the war and revolution victims of St. Petersburg. This was the first eternal flame set up in Russia, and the one in the Kremlin was lit from this fire in 1967.

The memorial itself is quite simple and understated. It lies dead centre in the park with four “corners” and two paths that cut through the middle like a square cross. On each side of the four corners are memorial plaques, but of course I could not read them. In each corner lay a memorial wreath. When I first arrived here I was the only one here (other than park users), but then several large tour buses dropped off their passengers to cut through the park to get to their final destination of the Church of the Spilled Blood. So then, of course, I just watched as people took photos of the site (but mostly of themselves) before they scampered off. It seemed clear that not many knew what it was for. 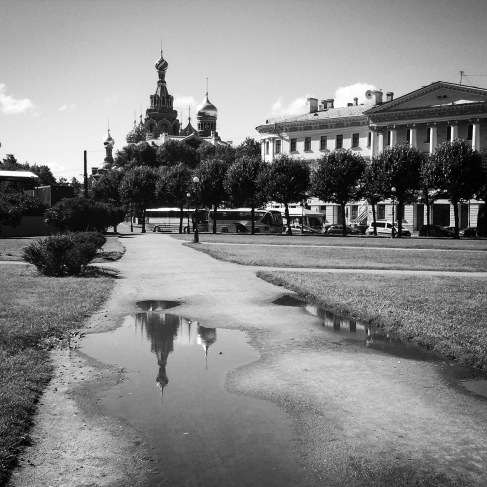 Church of the Spilled Blood, as seen from the park 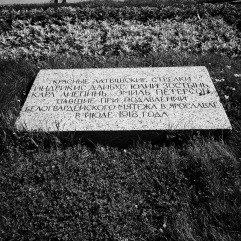 One of the memorial plaques

Quality of Monuments: Just one monument here, a small square with an eternal flame in the middle.

Cemetery Grounds: Not a cemetery as such, but the park is a nice place to hang out and has benches. Quite a few people were sunbathing here.

Visitors: Few, although I imagine quite a number of tour groups pass through here as there is limited space available for the big tour buses that congregate near the Church of the Spilled Blood.

Photographer Notes: Nothing to say really.

Location: Just north of the Church of the Spilled Blood. If you keep going you’ll cross the bridge over the Neva river which will bring you to the Peter and Paul Fortress, where the last Tsar (Nicolas II) and his family (and many others) are buried. I wish I had paid more attention to my maps at the time so I could have done both in one day.