As I’ve mentioned previously, there are four cemeteries at Alexander Nevsky Monastery. The Tikhvin and Lazarus Cemeteries are located outside the official gates, but the other two are located inside the monastery grounds. Even though Nikolskoe is clearly the largest of the four, I only found it by accident after I needed to find the WC after visiting the cathedral. Both, in this case, were located behind the cathedral itself. I was so excited I forgot about my need to relieve myself and headed straight to the cemetery.

This one is slightly newer, having been established in 1863, and is home to some well-known Russians, as well as the wealthy elite. This cemetery not only has the standard gravestones and statues, but also some elaborate family tombs – the largest I’ve seen in Russia so far. What I found interesting was that many of the tombs seemed abandoned and desolate – broken windows, missing doors, destroyed mosaics, etc. It seemed strange that there was this very visibly unkempt area, considering this is still a working cemetery with plenty of newer graves on site. From a photography standpoint however, I found this area really interesting to explore.

Researching the history of this cemetery, it seems it fell into disuse from the 1930s and 40s, and was possibly slated for demolition, with some graves of prominent people being moved elsewhere. Unlike Tikhvin and Lazarus, it wasn’t deemed important enough to keep. Luckily, it wasn’t destroyed, and in the 1970s it was restored and re-landscaped, and burials were permitted there once again. That certainly would explain why there are some graves with death dates in the late 19th-century next to those with dates in the late-20th/ early 21st-century. 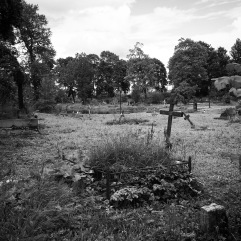 Quality of Monuments: An interesting mix of older and newer gravestones. The older section has larger, mostly derelict tombs that are pretty interesting to look at.

Cemetery Grounds: Quite large and spread out, it seems to take up the entire back area of the monastery grounds. Most of the paths are well-maintained.

Visitors: There were a few stragglers like me wandering around, a few mourners visiting and cleaning graves, and a few workmen working on the grounds.

Photographer Notes: The older graves, to the right as you enter, were a lot more interesting (for me) to explore, especially the old tombs.

Location: Inside Alexander Nevsky Monastery, behind the Cathedral. No fee to get into the cemetery, although there is to the monastery grounds (although for some reason the guy at the booth waved off my fee, I don’t know why).