…or the twin cemetery to Tōkōji, or perhaps I should say its elder sibling, as it was established several decades earlier, in 1656. The first, and even-numbered Mori lords are buried here (the odd-numbered ones, minus the first, are at Tōkōji). It definitely takes a little more effort to get here, as it is on the southern edge of the city, but it was easily doable as both tourist buses run by here. So, after I finished at Tōkōji, I headed straight here.

The cemetery beyond the gate

Tōkōji is situated in a beautiful neighbourhood that has a number of other tourist sites around it, so it is more visited. When I first arrived there the lady at the ticket office gave me a ticket and a map. At Daishoin however, the experience was a lot different. To be fair, it was easy to find, as there are stone lanterns lining the road up to the temple, so in that sense it was an easier place to get to. But as I got near the top it was clear that there was a lot of construction/renovation going on. I knew this before I went, but wasn’t too concerned about it, as it focused on the temple buildings and not the cemetery itself. However, the old man running the booth was not helpful in any way, and sent me on a wild goose chase to look at the construction, when really what I wanted to see was the cemetery. In any event, I wound up where I wanted to be, and had the entire cemetery to myself as I explored it.

Looking back towards the cemetery 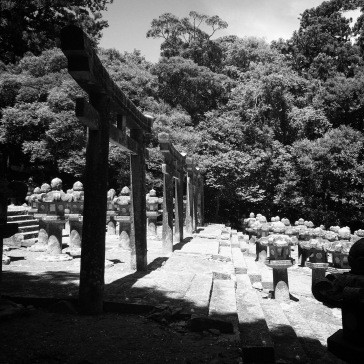 Aesthetically-speaking, it’s so similar to Tōkōji that most people would be hard-pressed to say which cemetery was which, if you only went by the photos (and not the kanji on the headstones). Even though it has more iconic, moss-covered stone lanterns than Tōkōji, it somehow feels smaller. Perhaps it was, size-wise, as it did not have the same open feel of its sibling. In any event, I didn’t stay overly long here, as I knew I would be coming back in the evening to see all of the lanterns lit up. 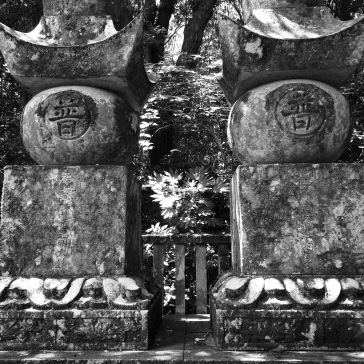 So officially the temple reopens at 7 p.m. for the lantern lighting. I was there early, around 6:30, because that’s when the last bus made it ’round to the temple stop (I ended up walking back to my hostel later that evening). There were a few stalls set up with drinks, shaved ice, and various fried foods, but it definitely felt like a local, laid-back affair. There’s no entrance fee for the evening festivities, but you could pay 100 yen for a small candle and a fan to keep you cool. Everyone, including me, did this. We were encouraged to put our candles around the temple area, but I kept mine with me until the end, when I replaced a burnt out light in one of the lanterns. The nice thing about being there in the evening is that they opened up the renovated areas and lit them up, so you could see what work was being done – it was much better than what I had seen earlier in the day.

Once the cemetery re-opens, two things happen. First, the official candle lighters get to work. In this case (and it seems to me, this also happened the first time I came here more than a decade ago) it’s mostly young boys, aged 8-12. In one way this is okay, because they work fast to try to beat each other. On the other hand, they’re very immature. Once they figured out that the plastic cups around the candles melted easily, they became much more interested in that, ruining the candles to be lit (since they wouldn’t stay that way without the cups). Luckily though, the few adults who were also lighting candles got them back in line before they ruined everything. The other thing that happens is that people start taking photos immediately, even though not all the candles are lit and it’s still fairly light outside. Photographers with tripods rush to get good spots and set up before it gets too dark (of course, this is what I did). However, once the light levels got low enough, I then started moving around the cemetery to get different viewpoints.

The different circles represent the various phases of the moon.

Night descends quickly, and tripods are necessary to get sharp details

Around 8 o’clock a group of temple priests come and perform some sort of ceremony in front of the Mori lord tombs. It lasted quite a while (at least half an hour) before they left. By that point, I felt like I had gotten enough photos, plus, I knew I had a long walk ahead of me to get back to my hostel. As I left the cemetery, even more people were arriving (it’s open until 10 p.m.), foreigners included (I seemed to be the only one up to that point).

Monuments: As with Tōkōji, the lanterns are the real draw here, and if you are ever in Hagi on August 13th, they light up all of the lanterns which makes for a really magical atmosphere.

Grounds: The cemetery itself is on a slight hill, but the paths are wide and the stairs are easy to navigate. The side sections are a little more wet and mossy. Lots of insects here, so bring bug spray. Note: reconstruction work will continue on the main temple buildings until the spring of 2018.

Visitors: There was nobody here when I visited during the daytime, but hundreds of people came at night for the cemetery light-up.

Photographer notes: The light here can be really contrasty, so a bright overcast day would be best. Tripods are allowed here, and as mentioned above, coming for the lantern lighting in August would be great for photos.

Internments: The lords of the Mori clan, plus others

Location: It’s in the southern part of the city. Both of the loop buses (red and blue lines) stop here. Similarly, it’s about a 5 or 10-minute bike ride from Hagi Station (or about 15 minutes from downtown).