I like going for walks, especially at night when it’s quite and there are fewer people about. I’ve been slowly exploring the outer reaches of my neighbourhood/district, and as such, have come to realise that I have easy access to the Biwa Canal route. This is a canal that for years brought water (and goods) from Lake Biwa to Kyoto. It’s possible to walk the entire route, although I have yet to do it in one go. In any event, on a drizzly Sunday morning with a typhoon scheduled to hit in the afternoon, I decided that this would be a good day to walk it, and, as relates to this blog, see the Emperor Tenji’s (reigned from 661-672 CE) Mausoleum, which lies along the route. 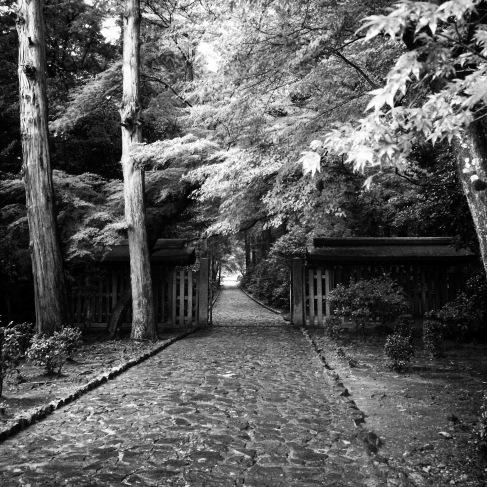 The path to the mausoleum

A wide angle view of the area

The mausoleum is not far from Misasagi subway station, which is where I started. The grounds themselves are huge, almost as large (or larger than) the grounds at Nanzenji or Kiyomizudera temples. It is, in fact, a beautiful location, full of tall trees that line the path to the mausoleum. It must be stunning in the fall, when the leaves turn colour (which reminds me, I’ll have to revisit to see them). There was something really calm and relaxing about walking along the path in the late morning, with nothing but the sounds of birds singing and the misty drizzle to accompany me.  The mausoleum itself was quite unassuming, just a small torii gate surrounded by a simple fence. It was Japanese simplicity and minimalism at its best. Unfortunately, most of the grounds were off-limits to explore, and I’m not sure why, but it would have been nice to walk amongst the trees, something I miss living in a big city like Kyoto.

The north edge of the mausoleum, looking south from the canal 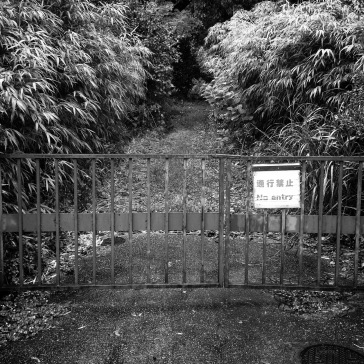 Many parts of the grounds are off-limits 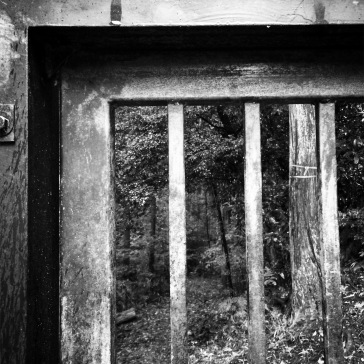 Looking through the gate towards the mausoleum

After visiting the mausoleum, I walked back towards the entrance so that I could skirt around it and get to the Biwa canal path, which lies to the north of the mausoleum grounds. Being a rainy day, there weren’t too many people about, which was sensible since parts of the path were quite muddy and difficult to get around. Not far from the mausoleum was Daihonzan Hongokuji temple. I couldn’t find any information about this temple, and it was hard to tell its age, as there was renovation going on, some of which showed the older pieces (roof tiles, etc) that were being replaced. As with most temples, it had a small cemetery attached to the grounds. Some of the monuments were interesting, especially a small section that had numerous tall pillars crowded together.

Near the entrance of the cemetery was a golden torii gate. Most torii gates are made of wood or concrete, and are often painted vermillion. Occasionally you might come across one made of unpainted wood (especially older ones). But this was the first torii gate that I had ever seen to be painted gold. It practically shouted out “look at me!” as it was visible all around the temple grounds. Despite that, I didn’t find it gaudy or crass, it seemed to work well with its surroundings (a real splash of colour surrounded by greens, browns, and greys). 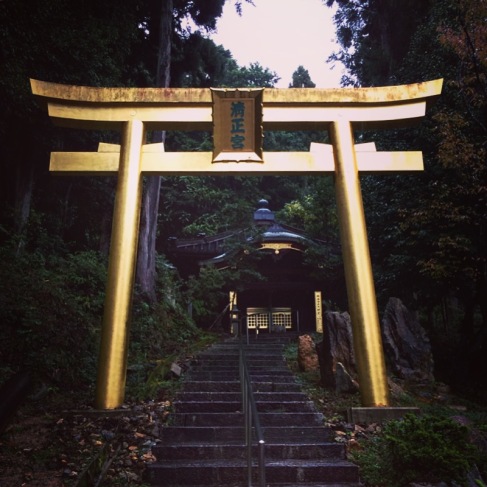 Early maples along the canal

Monuments: Almost nothing to see at the mausoleum; the temple had a few interesting buildings in addition to the small cemetery.

Cemetery Grounds: The mausoleum is located in a flat, wooded location. There is a stone path but it’s not particularly smooth.

Photographer notes: In both cases (the mausoleum and the temple cemetery), the actual memorials were not that memorable, but the grounds that surrounded them were well worth photographing.

Location: After exiting Misasagi station, walk eastwards along the main road. You’ll find a large park with lots of trees on the north side of the street, this is the entrance to the mausoleum. It’s well sign-posted. Conversely, you can walk by the mausoleum if you do the Biwa Canal hike, but you won’t necessarily know where the mausoleum is unless you have some GPS help with you.

Hours: Unknown. There is a gate, so probably daylight hours are a safe bet.