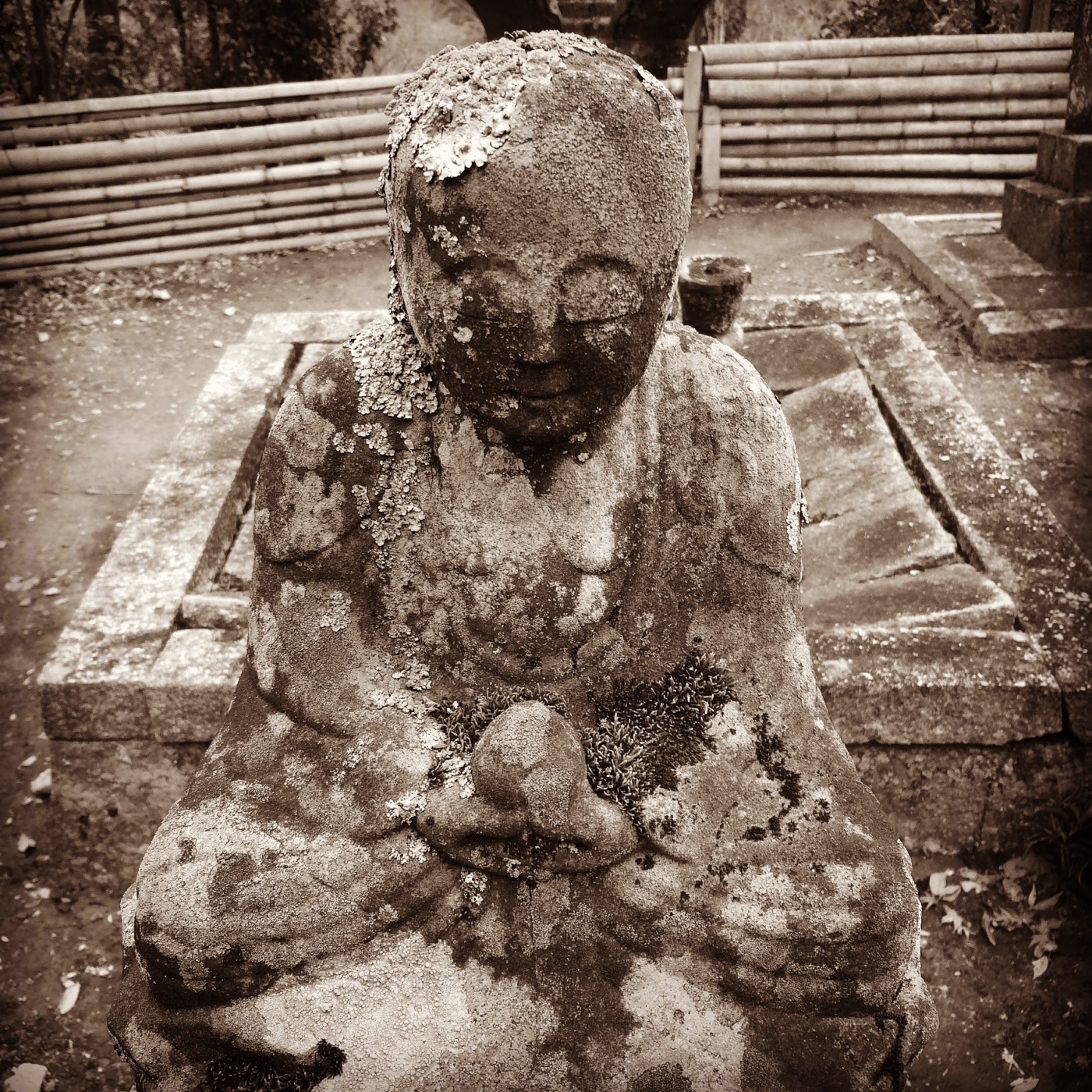 The Arashiyama district in Kyoto is one of the most popular, and therefore crowded, areas of the city. During the fall foliage season, the number of visitors to this area seem to increase tenfold, making it a crush of humanity no matter where you go. As such, this is usually a place I avoid. However, I figured that by mid-December, it wouldn’t be so bad, as most of the leaves would have fallen by then, so I decided to take a chance and go exploring. In doing so, I came across Nison-in temple, just off the path of Arashiyama’s bamboo forest. It’s one of the oldest in Kyoto, dating from 834-847 CE. however, it was later rebuilt after being burnt to ash during the Onin War in the mid-15th century. Some of the buildings were reconstructed by Honen, the Buddhist monk who popularised Buddhism in Japan. This was considered a prestigious temple, so quite a few court nobles were buried here. 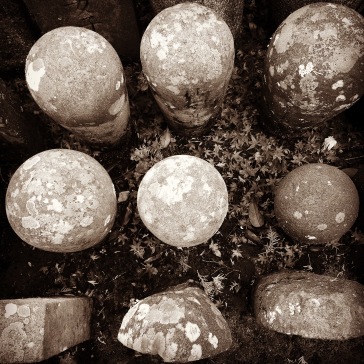 Small stones from above 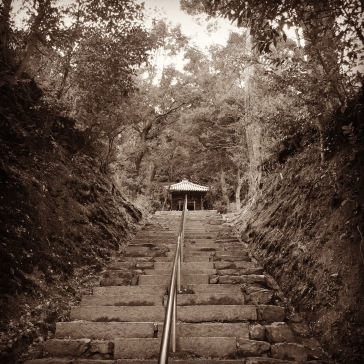 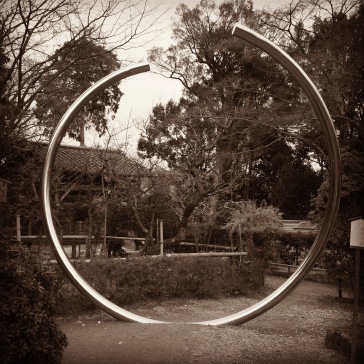 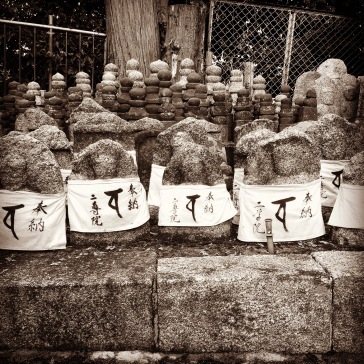 Small jizo near the entrance to the cemetery

Japanese cemeteries tend to be fairly egalitarian affairs, but it’s in these older cemeteries where one can see the divisions of class more clearly. The higher up the mountain you go, the more elaborate, or unusual, the monuments and grave sites become. So most people come here for the temple, which features a couple of famous images, and in the fall this is a prime leaf-viewing spot, as was evidenced by all the dried up maple leaves covering the pathways. However, I was really interested in the cemetery, so I went up the hill to the right of the entrance. Not far from there I came across a rounded tomb (?) covered with small stones and moss. I don’t know who it’s for, but it’s certainly different than most of the monuments that I’ve seen in Japanese cemeteries. There were some family memorials that featured gates, something I saw in Nagasaki as well, although in almost all cases some of the stones had fallen off the pedestals. 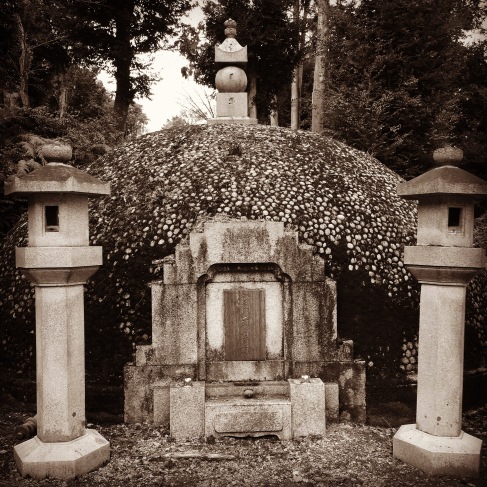 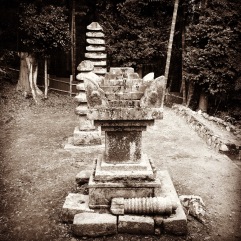 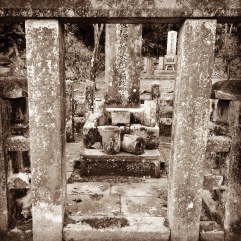 The further up the mountain I went, the more mossy and lichen-y (is that a word?) the stones became, which had a very wabi-sabi aesthetic. I was here on a day after it had rained, and there were still pools of water everywhere, and some mud as well. I think on a rainy day the chances of slipping and falling on the higher slopes would be much higher. Although this temple isn’t well known, it is on the well-established Arashiyama tourist trail, so there were a number of visitors there, not only to the temple itself, but up in the cemetery too. I wish my Japanese was better so that I could read what was written on the monuments, but even without knowing, it was still an interesting place to visit. 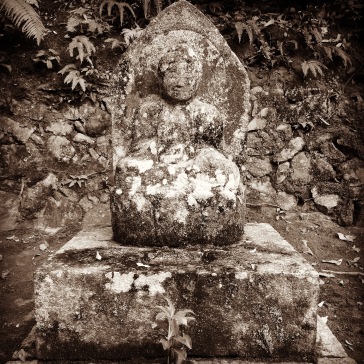 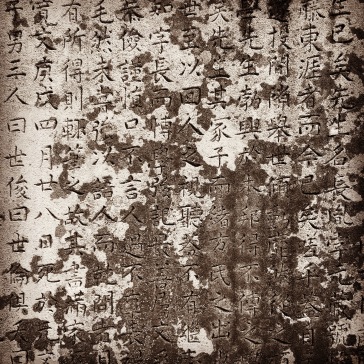 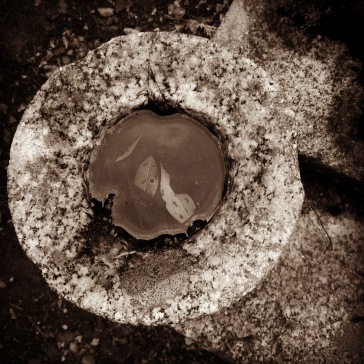 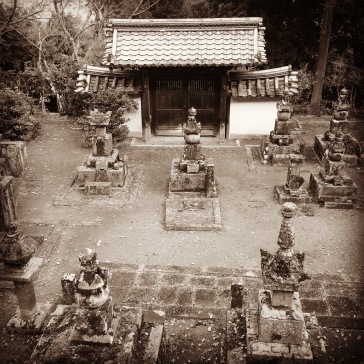 Monuments: Most are pedestal type monuments, typical of Japanese cemeteries. There are a few statues. The older ones are covered in lichen and the old stones have worn away considerably. Quite a number of stones have fallen but have been placed in a secure location.

Grounds: The cemetery is on the side of Mount Ogura that rises up behind the temple. There are stairs and flat pathways to get around. It can be slippery when wet.

Visitors: I came here at the tail end of the high season (fall foliage) in the late afternoon and there were some visitors here, but the numbers were reasonable.

Photographer Notes: None really, although a tele lens might be useful for details.