As readers of this blog will probably realize, I prefer going to older cemeteries, not only for the older monuments and atmosphere, but also because it means I won’t interfere with any modern-day mourners who are there to grieve for their loved ones. That’s not always possible, as some older cemeteries are still functioning today, but even then I will always remove myself from an area to give people some privacy. So when I looked up some. cemeteries in The Hague, I thought I had found an older cemetery that was fairly easy to get to. It was, but when I arrived there, it was clear to me that this was 90% a modern cemetery, with some older monuments mixed in. (I later realised that I had not gone to Bergraaf cemetery as planned, but the St Petrus one in the same area). In actual fact, this is quite an old Catholic cemetery, first established in 1830, but to me, many of the graves looked much more modern. The arcade has some older monuments and statues, and there were some scattered throughout the grounds. 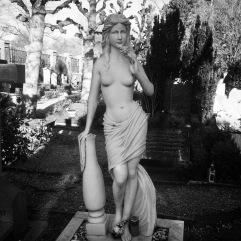 There’s a nice layout here, that loops around, and the cemetery is full of flowers and bushes. Like many of the other places I have been to on this trip, there was some maintenance work being done. Other than that, it was a nice place to wander around.

Monuments: A few older monuments and statues, but most of the cemetery is more modern. Glass seems to be a popular gravemarker in Dutch cemeteries, and there are plenty of examples here.

Grounds: The cemetery is not that large, it’s perfectly flat and has nice paths which make it easy to get around.

Visitors: There were quite a few mourners and groundskeepers here when I visited in the late afternoon.