Back in 1833 a cholera epidemic ravaged the city, and Queen Maria II ordered the establishments of two cemeteries to deal with the dead – Prazeres in the west, and São João in the east. Since the latter was the closest to where I am staying in Lisbon, I decided to head here first. This really is one of the grand cemeteries of Europe – a huge hilltop cemetery overlooking the sea in the heights of Lisbon. I walked there from my hotel and as I walked along a very long wall I eventually realised that I was walking the length of the cemetery! 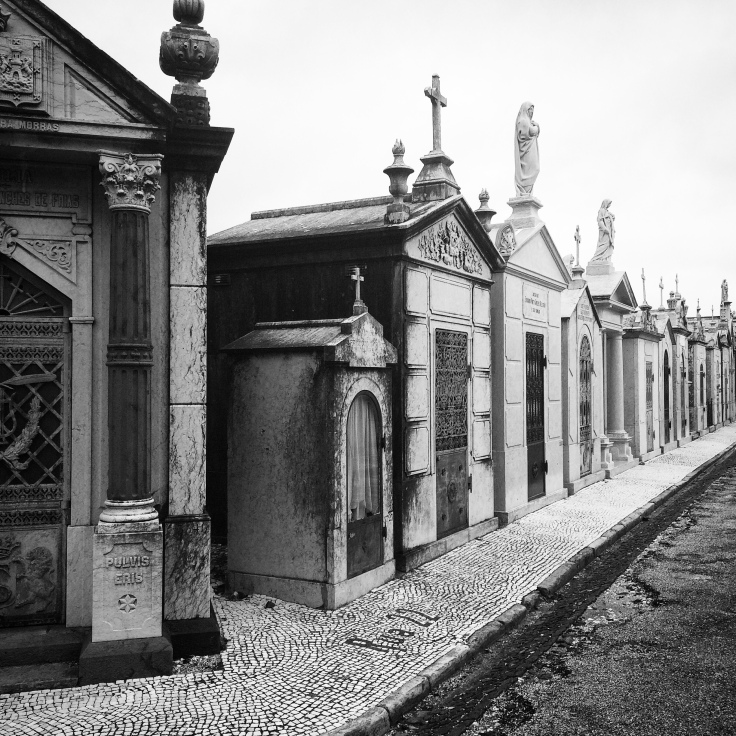 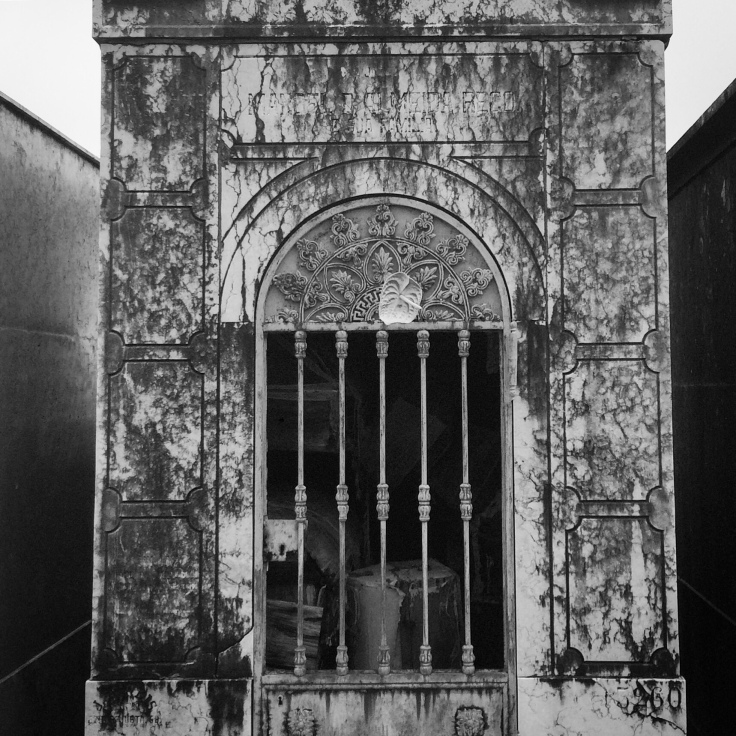 This cemetery is reminiscent of Pere Lachaise, or I imagine Recoleta in Buenos Aires (near the top of the bucket list!). It’s probably 90% above ground mausoleums, from small modest affairs holding up to 3 coffins, to huge grand structures that would be tourist sites in their own right if they were outside of a cemetery. The mausoleums were of various ages (some as old as the cemetery itself, others quite new) and in various stages of delapidation – old rusted doors; cracked, broken, or missing glass on those doors (not surprising, since most of the structures are on a very sloping hillside); and for the few regular graves there, fallen headstones. In some cases, even the caskets/coffins within the mausoleums had fallen off the shelves or had fallen apart completely — in one case you could see the outline of what was left of the body in a shroud as the coffin had completely fallen apart around it. I don’t get creeped out at cemeteries, but I have to admit that bothered me a bit.

The cemetery is on a hillside with quite a steep incline, which meant going up and down the lanes (all flat, no stairs) provided quite a workout. It was really interesting to see all of the different symbols (often repeated) and occasional statues (mostly religious in nature).

Monuments: Mostly mausoleums here, all above ground, made of marble, granite or other stone. Some look like Portuguese houses with the orange roof tiles and painted blues tiles on the walls. There are some statues, most are religious in nature, but on the larger monuments (or by themselves) they tend to be more secular.

Grounds: It’s flat, but sloping, so if you have a problem with hills, this is not the cemetery for you. Otherwise, it’s easy to get around, although with all the same kind of monuments around, you may find yourself backtracking through an area more than once (at least I did!)

Visitors: there was a service going on while I visited, otherwise I did not see any other visitors within the cemetery itself.

Notes: Many of the statues are on the top of the mausoleums, creating a problem with perspective and metering (too much sky). Some of the larger statues/monuments are actually in the middle of the roads as you wander throughout the cemetery.