Barcelona. Home of two of the world’s best cemeteries, Poblenou and Montjuïc. I have wanted to come to Spain to photograph these two cemeteries specifically. After grabbing a quick lunch after arriving in Barcelona, my first (and only) stop of the day was Poblenou. The original cemetery here was built in 1775, but was destroyed by Napoleon and his troops when they arrived in 1813. However, they realized the need for a proper cemetery and plans were quickly put into place to rebuild it. In fact, one of the reasons why we have so many of these great cemeteries is because of Napoleon – everywhere he went in Europe, he ordered egalitarian cemeteries to built outside the city walls. Of course this started in Paris, but also happened in places like Italy and Spain. Anyway, one of the goals was to have everyone equal in death, and you can certainly see this at Poblenou. The cemetery is almost completely composed of multiple wall niches, all the same size, for burials. And they are most certainly still be used today, as evidenced by the number of (mostly fake) flowers (and some very real funeral flowers) that decorated most of the niches.

Of course, by the 19th century things began to change and rich families began to put up massive monuments/mausoleums when the cemetery expanded. Some of the more modest ones are actually in the spaces between the wall niches, but most of them are at the back (north) end of the cemetery. One of the most famous statues is “The Kiss of Death” by Jaume Barba (aka Petó de la mort). If you Google Poblenou this is the image that comes up the most. I didn’t find it in the main mausolea/statue section, it’s in a smaller, raised section to the northeast. It’s a fantastic sculpture (dating from 1930) and I took a lot of photos of it. But wouldn’t you know, I did not take one with my phone so I don’t have one to up here now. I’ll definitely have to go back and grab another shot of it. I was there in the late afternoon when it was fully illuminated by the sun, but I may try a different time of day just to see how the light affects it. 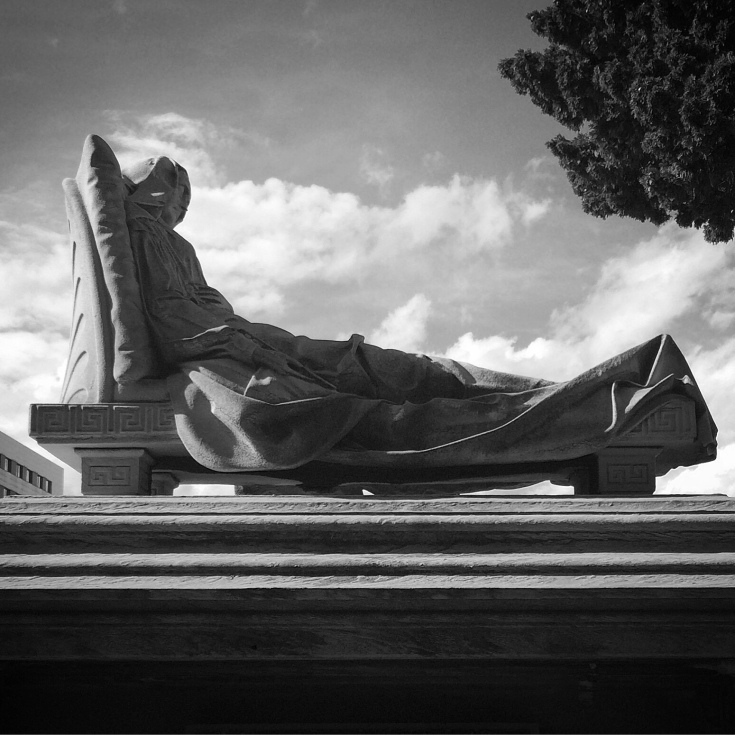 The monumental section at the back of the cemetery is ringed on all four sides by a portico that features individual monuments. However, unlike other cemeteries with similar porticos (Staglieno, Bologna, etc), many of these were empty and/or replaced with newer, smaller monuments. Some of them were clearly being used by roosting pigeons as well. However, the statues that were there (and the reliefs on the smaller niches) were full of interesting detail. The statues in the centre of the square, however, were not so lucky. Many of them were made with more porous stone (sandstone?) and they did not weather the elements that well, with many statues missing part or all of their heads and/or faces. However, the marble statues were outstanding, especially some of the angels, like the one taking a young woman up to heaven (sculpted by Fabiesi). 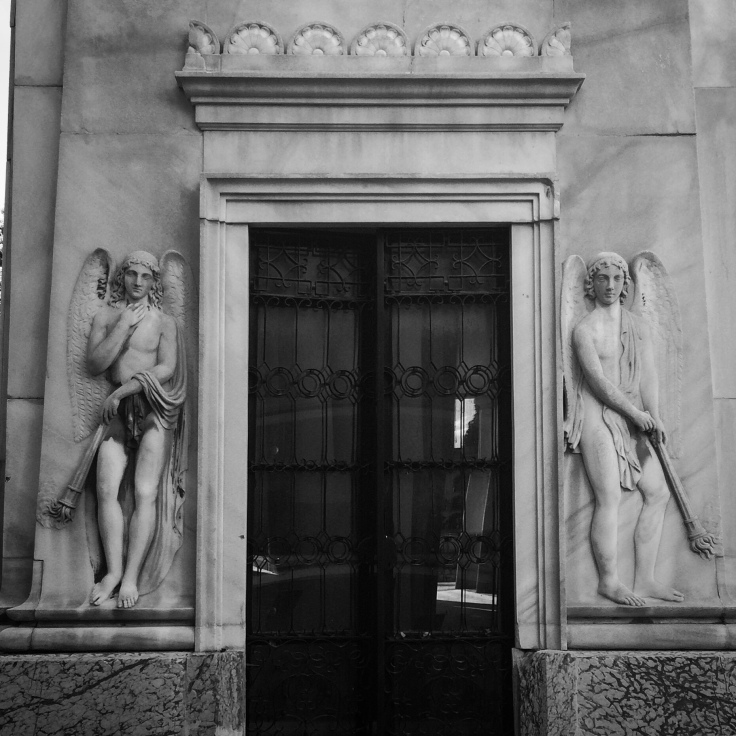 I was in a bad mood when I came to Barcelona today, but I realized I was singing when I was in Poblenou – I have no idea why it put me in such a good mood, but it did. I guess I really do like seeing and exploring beautiful cemeteries much more than I thought! I have a few more days here and will definitely be going back for a second visit. 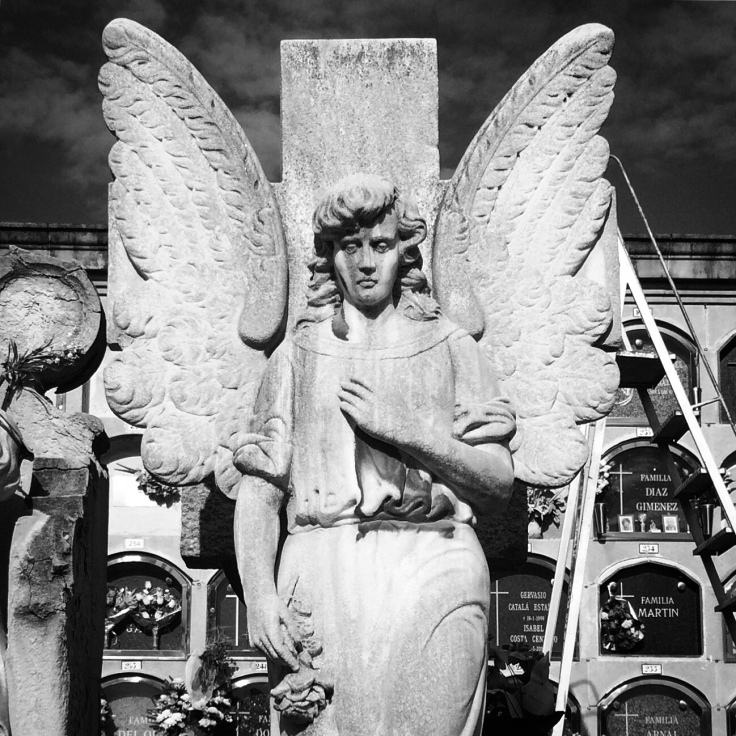 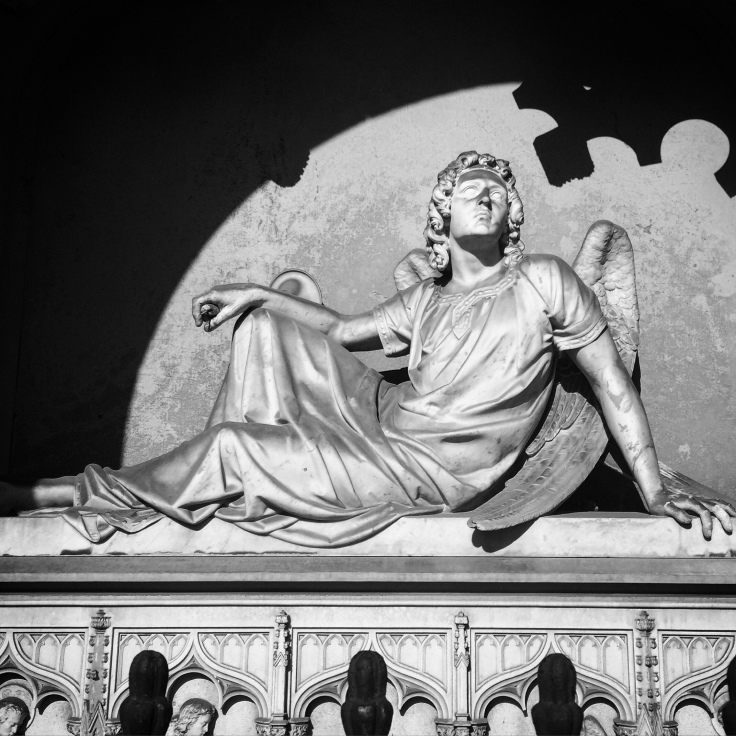 Monuments: There aren’t as many as some of the other big cemeteries in Europe, but the Kiss of Death definitely puts this cemetery on equal footing with them. The mausolea, and the other statues in the cemetery are also well worth exploring – it makes up a short section overall, but you may find yourself there longer than expected because of all the details you find around you.

Grounds: Every thing is flat and paved (stones), but there are some stairs into various sections. Most of the cemetery is of walled niches, which meant (at least for me, in March) that half the pathway was in light, the other in shade – choose your side to stay warm or cool. The niches are well worth exploring, although many of them are much newer.

Visitors: There were a few tourists there, like me, and even more mourners, visiting their loved ones. One woman, sitting by her niche, was knitting the afternoon away!

Notes: Because of the high walls and lack of vegetation, there can be some harsh shadows when the sun is high and there aren’t many clouds (something I imagine is pretty common in this city). I definitely think this is a place to explore in different lighting conditions, if you have the time.

Notable Internments: Composer Josep Anselm Clavé, Serafi Pitarra (poet and playwright), and the Maldà family. Also, the “little saint”, a young man who died too young but whose tomb is still remembered and honoured today.

Location: Carrer del Taulat, 2, 08005, Barcelona. The nearest metro stop is Llacuna on the L4 line. It’s less than a five minute walk east from the station. You’ll see the very large cemetery walls long before you get there (they are covered in historical facts).

Hours: 08:00-18:00 daily. Tours are offered here in Spanish or Catalan, and they hold events around Halloween as well.