Ever notice that when you live close to a place, you kind of take it for granted? I guess you could say that’s the story of my life. I live in Kyoto but I rarely go out to explore what this city has to offer, something I’m sure most people understand – it’s hard to be a tourist in your own city. Especially here in Kyoto, after a while, one temple is very much like another, or so it seems. Bishamondo Temple is one of those places. It’s dedicated to Bishamon-ten, one of the 7 lucky gods. It has a long connection to the imperial family, and even today the position of the temple priest is filled by an imperial family member. Even though it’s one of the oldest temples in Kyoto (est. 703), it’s not a famous temple at all, and I guess it being a neighbourhood temple for me, it’s just part of the background. It’s well off the tourist trail, however, there are always a few locals about, but it gets packed in the fall because it is famous for it’s fall foliage, due to the hundreds of maple trees (and leaves) on the grounds (see here for some examples). It’s also popular in the spring, as it has a spectacular weeping cherry tree on the grounds. There’s a nice little pond here as well. I’ve walked around the temple grounds many times, but this time I happened to notice a cemetery out the back way and of course had to go explore it.

Secondary stairway, but amazing in the fall when covered in maple leaves 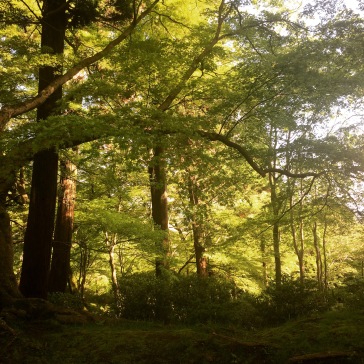 Gate, beyond lies the staircase 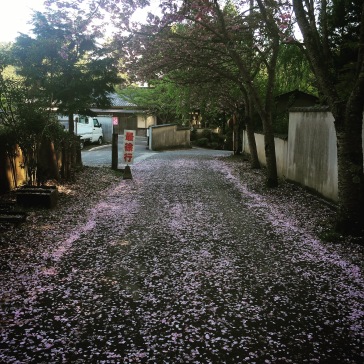 Path between the temple and the cemetery, with cherry blossoms

The cemetery itself is off to the left-hand side of the temple. It actually sits on the slope of the hillside, so only a small part, which appears to be the more modern part, sits on level ground at the top of the hill. There were some interesting, very stylized images on some of the stones, which I found quite interesting. Then it was down some narrow stairs to see the older part of the cemetery. Some larger monuments were fenced off, clearly indicating some important people were buried there (imperial family? feudal lords?), but I couldn’t find any information about them. Hopefully, the next time I go there, there will be a monk I can ask.

All in a row 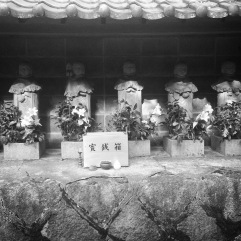 There’s not much I can say about this place. It’s small, but very atmospheric amongst the trees, and the worn stones had a timeless quality to them. The temple and the overall grounds are beautiful, especially on a sunny day – there’s something about this luminescent green that is very calming. I wish they had benches there so you could just and enjoy it all. 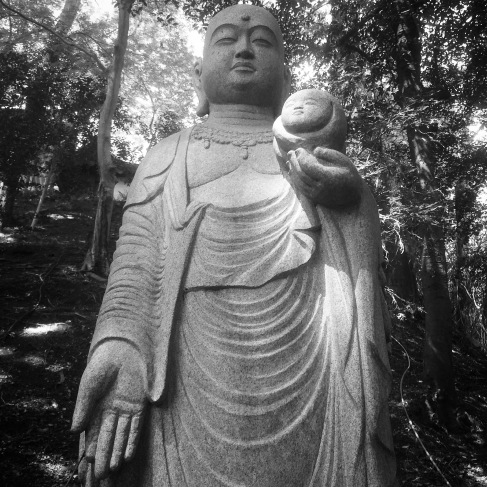 Statue on the temple grounds 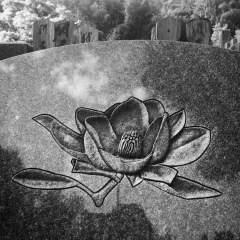 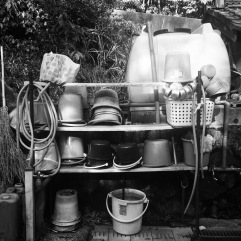 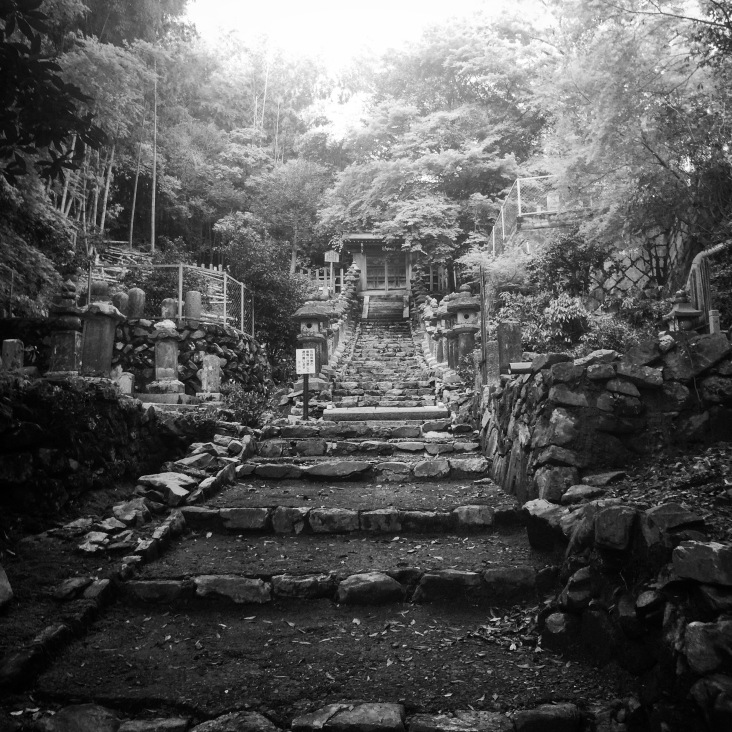 The older part of the cemetery

Monuments: Mostly traditional stone grave markers, some of the newer ones have interesting stylised images on them. The older part of the cemetery has very worn stones covered in moss.

Grounds: Fairly small, but on the slope of a hillside.  It’s fairly easy to get around but there are some narrow paths and stairs in some places. The real star of this place are the extensive grounds in and around the temple, not the cemetery.

Visitors: None while I was here

Established: The temple was officially established in 703 but it’s current location dates from 1665. I could not find information about the cemetery specifically.

Location: behind Bishamondo Temple, which is about a 15-20 minute walk north of Yamashina station in Kyoto. Exit the station, take the pedestrian underpass north going under the tracks, turn right and walk until the first road you come across. Take a left and follow that road all the way up the hill until you reach the temple.