Salem, a town synonymous with witches, has completely leaned into its own mythology. That has both its benefits and disadvantages: on the one hand, the town has had to come to terms with what is, in fact, a dark stain on its past: the Salem witch trials. On the other hand, you have to deal with a lot of kitschy-tourist merchandise everywhere you go – if you’re into witches, cats, and the mystical arts, this is the place for you. In some ways the present seems very disconnected from the past: the promotion of the very things that led to the deaths of so many women (and some men) would seem strange to those who lived those events so long ago. I guess it’s the same as many dark tourist sites around the world – the further away we are from the actual events, the easier it is to commercialize and entertain from those same events (think dungeon tours in many a European/British city). 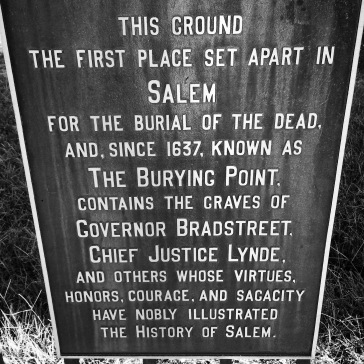 Map of the cemetery

I once did a paper on the Salem witch trials (and re-read it last year with some chagrin – my writing has definitely gotten better in the last 2 decades), so I had some knowledge of what happened here, but I have to admit that I had forgotten about the specific people involved until I began re-reading the subject before coming here. For those who are not aware of the specifics, back in 1692 two girls began acting strangely, which soon spread to other children in the area, and soon accusations of witchcraft were levelled at some of the neighbours for their behaviour (one of the more plausible theories now is that the children may have been affected by ergot poisoning). One thing led to another and over the course of just over a year, 136 people were accused of witchcraft. Twenty of those people were killed – 19 by hanging, and one man, Giles Cory, was pressed to death. Soon after, the hysteria passed, and most of the judges from the trials repented, but not Judge John Hathorne, ancestor of Nathaniel Hawthorne (who added the “w” to his name to further distance himself from this black mark of his family’s history). Judge Hathorne is the only person connected to the witch trials who is buried in this cemetery (most of those who were hung were buried near where they died). 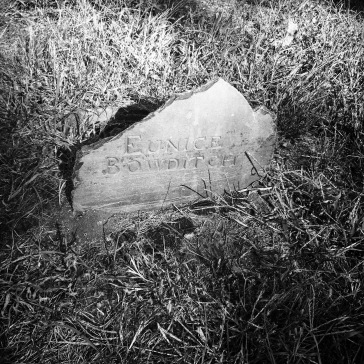 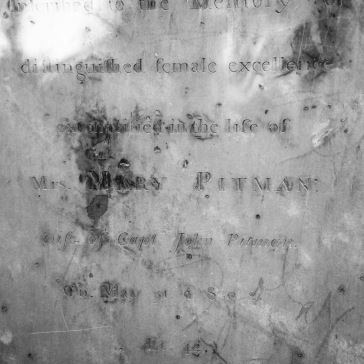 There were several small groups (and one guided group) exploring the cemetery when I was there late in the afternoon. Like Plymouth’s Burial Hill Cemetery, there are a lot of old slab style gravestones here. Although the cemetery itself was quite small, the very nature of the stones made it easy to spend time there looking at all the variations. 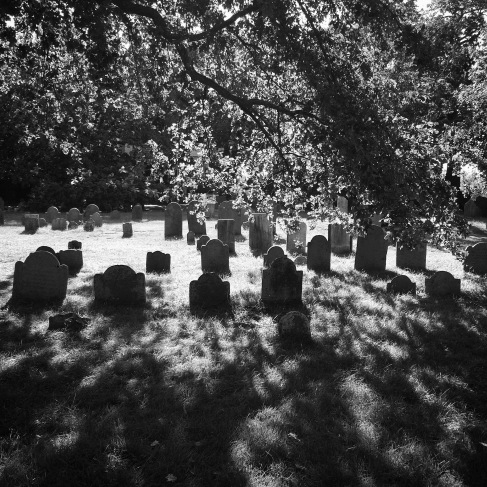 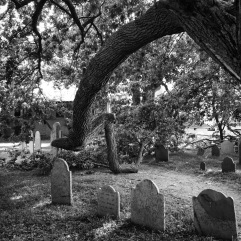 There were some beautiful old trees in this cemetery, and with the late afternoon light filtering through the leaves, I was really inspired to take many photos while there. In particular, I was fascinated by this large branch (itself bigger than most of the trees in my hometown) that had broken off a rather larger oak tree, and spent a lot of time photographing it and the surrounding area. I think some of the other visitors thought I was crazy, but it doesn’t matter.

Monuments: Lots of old slab-style gravestones, some above ground tombs. Like other cemeteries with these types of markers, many are faded and difficult to read, but usually the image reliefs are still legible.

Grounds: It’s not very big and easy to walk around.

Visitors: At least 20 while I was there. It’s right in the heart of downtown so I think many people visit it, even if it’s not exactly on their bucket list.

Notes: The light in the late afternoon (after 3 p.m.) is really beautiful, with lots of long shadows.

Hours: from dawn till dusk, usually closing around 6 p.m.