When one thinks of grand New York city cemeteries, the first that will come to mind is Green-Wood Cemetery in Brooklyn. It’s definitely the most famous and well-known, not just to taphophiles and the writers of “best of” cemetery lists, but to the local residents of the city as well. Woodlawn Cemetery in the Bronx, on the other hand, does not get mentioned nearly as much, which is a shame as I found it to be a really beautiful cemetery well worth the long metro ride up to the northern end of the city.

The first thing you notice after entering the front gate is the mausoleums. They’re big and they dominate the landscape as you enter Woodlawn Cemetery. They’re everywhere and I would argue take up a fair portion of the cemetery. I don’t know if it’s the numbers or the density, but they certainly are impressive. I saw a couple of tours going round (and apparently in) them today, but did not realise such an option was available when planning my day there (which started late and was dampened somewhat by the steady rain we’ve had and will continue to have over the next couple of days). In fact, I found out that one of my favourite bloggers (@onlylivinggirlny) was there today at the same time I was doing one of those tours! Ah well…

Another thing that became apparent quite quickly was that there were many interesting statues scattered throughout the grounds, and despite the number of copies that existed of what I thought were fairly individualistic statues, I still really enjoyed strolling the grounds looking at them. The only annoying thing (besides the rain) was the fact that in some places the grass had been recently cut, which meant that my feet and sandals quickly got covered in massive amounts of grass cuttings and small leaves. (!) It was actually easier to walk through the uncut grass in places, but as always when travelling, we have to make do with the weather and (poor) clothing choices we make (or have access to). 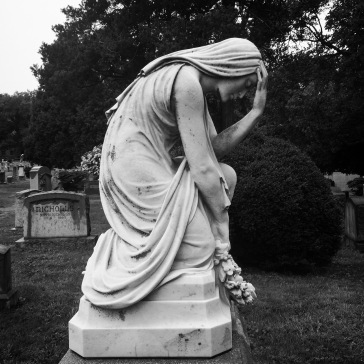 Although I was impressed with the statues I unfortunately did not have access to a map since the main office was closed today (Sunday). As a result, even though I came across some famous memorials (Woolworth, La Guardia, etc), I could not find the graves of people who meant something more meaningful to me, like jazz great Duke Ellington, or the wonderful dancer (and the man who made the Lindy Hop what it was), Frankie Manning – a man I had the pleasure of meeting in real life when I took dance workshops from him in both Singapore in 2003 and Toronto in 2006. When I was about to leave (the clouds were getting darker and the rain worse) I took a look at the map at the entrance again and I realised I probably missed that entire section where they were buried. I debated going back, but figured when I come to back to New York (and I will be back) I’ll go see them on a (hopefully) nicer day to pay my respects.

I certainly found this cemetery a lot easier to get around than Green-Wood, as it was not as hilly as Green-Wood is. I suppose the hilliness of Green-Wood was made worse by me visiting there on a hot and sunny day, but I think visiting it in the rain would have been worse (more slippery for sure) – but as I’ll be going back on Tuesday I guess I won’t have much choice in the matter! That said, it is a large cemetery, certainly comparable to Green-Wood – although it is smaller in size, it is the largest cemetery in the US in terms of internments (over 300,000). 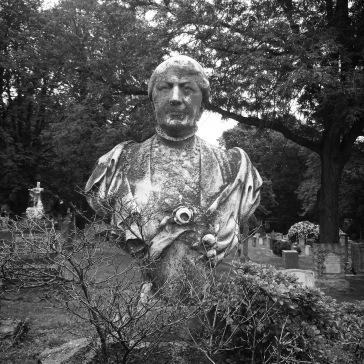 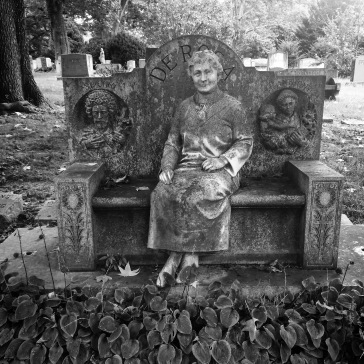 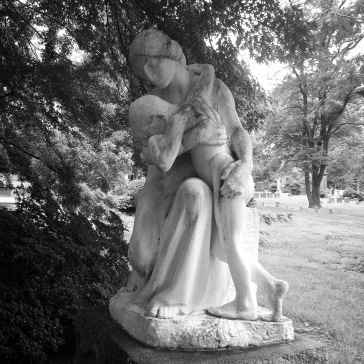 Unlike the other cemeteries I visited on this trip, I did not notice a lot of wildlife here, certainly no squirrels or chipmunks, despite the large number of oak and chestnut trees here. Maybe the rain kept them squirrelled away. 😉

I’ve said it before, but I’ll say it again. I’m in awe of the large trees that dominate these large garden cemeteries here in the U.S. Our trees certainly don’t grow as large (either in girth or in height) in Canada, nor in Japan, where most trees are pruned annually to keep their growth in check. The trees and winding paths make these very beautiful parks, with or without the memorials. But of course, since they are cemeteries, they are almost always deserted, which makes for a very peaceful experience. 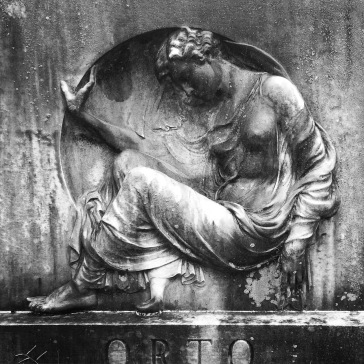 Seated in a circle in a square 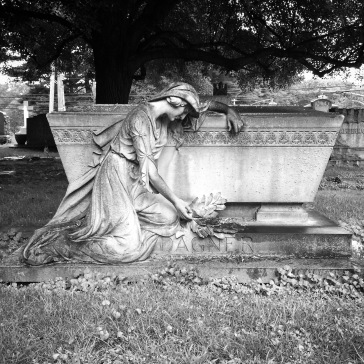 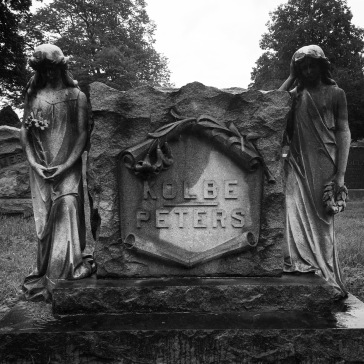 Angel statues dominated this cemetery more than any other style, and many were in fact exact copies of one another (which is why I don’t have pictures of them here – see one, see them all). But now and again it was possible to come across some pretty interesting ones, even if a couple were inexact copies of each other: 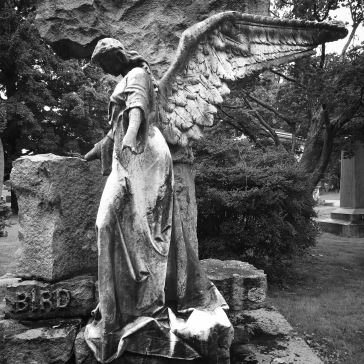 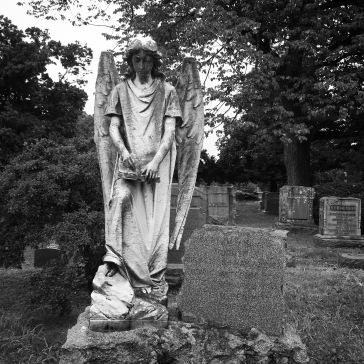 I haven’t visited all of the major cemeteries of New York yet (my plans for today, to visit the Calvary (and other) cemeteries in Brooklyn and Queens were scuttled when I discovered that half of the ones I planned to visit were closed on Sundays and/or Mondays), but I can already say that this is by far one of my favourite cemeteries I have ever visited, not just in the US, but anywhere in the world. This cemetery was surprisingly personal to me (I know someone buried here, I almost met someone I kind of know from social media, etc.) which, combined with the beautiful grounds and monuments, means it’s definitely a place I’ll be re-visiting the next time I visit this great city.

Monuments: Outstanding. Both mausoleums and statues were of very high quality and well worth wandering the grounds to find. If you can get on a tour to visit the mausoleums, I highly recommend it (something I hope to do next time).

Grounds: The grounds are mostly flat with some slightly rolling hills that are easy to walk on. The roads and paths are well maintained and easy to walk on. Having a map would be extremely useful to find graves of interest. If you are better prepared than I am, get the mobile app to make things easier for you (unfortunately my old phone can’t handle any of the apps these cemeteries provide).

Visitors: I saw a couple of groups here towards the end of my visit who were leaving the same time I was, a priest who asked me (!) for directions, and a couple of guards who wanted to make sure I was alright. I did not see any swing dancers at the Jazz Corner at the event that was supposed to take place today, perhaps because I never made it to the Jazz Corner, or because no one showed up due to the weather.

Notes: This place is gorgeous so make sure you have enough memory cards, battery power, or film if you are going to shoot here.

Cemetery: The Woodlawn Cemetery and Conservancy

Location: At Jerome and Bainbridge streets in the Bronx – take the Number 4 metro line all the way to the end (Woodlawn), exit the station, cross the street, and you’re right there.