I was living in Japan when the 9/11 terrorist attacks happened. I was already in bed when I got a couple of texts from my friends – something about the WTC in NYC – I was sleepy and wasn’t sure what they were getting on about; it wasn’t until I went to work the next day that I learned what had really happened. Needless to say, I was in shock. I would spend the next couple of weeks pouring over every newspaper, every news site, lost in the images of that horrible day.

So I when I had the opportunity to come to New York in September, I made sure to plan my dates around that anniversary. I wanted to go to the memorial museum, I wanted to see the tribute of light, I wanted to remember.

The first site I (inadvertantly) visited was not in New York, but New Jersey. After visiting the Harsimus Cemetery I walked over to the Liberty State Park so I could catch the ferry to Ellis Island. But when I got there, the Empty Sky Memorial stood out and I spent a few minutes there looking at this amazing memorial that was dedicated on September 10, 2011, nearly a decade after those attacks. It holds the names of all the Jerseyans who died in the attacks at the WTC, the Pentagon, and in Shanksville, PA. I found it visually arresting, even on a rainy day, as at times it seem to disappear into the sky, yet led the viewer to connect it with the New York skyline beyond. I found it very moving. 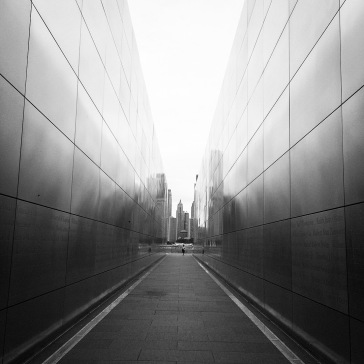 Inside the Empty Sky Memorial

On September 10th, I visited the 9/11 Memorial and Museum. As I wasn’t exactly sure when I would get there, I did not pre-book my tickets, so spent quite a long time in line (at least an hour and a half), in the rain. Luckily, I was next to a nice couple and we chatted about many things, including what we were doing when the attacks happened, to pass the time.

No day shall erase you

Once inside, you walk through various exhibits and artifacts from the World Trade Center. The Last Column is featured both when you start and finish your tour there, and displays many mementos left on the column before it was taken down. It began as a marker for those from Squad 41 to look for the remains of their fellow firemen, but soon got covered in many other kinds of graffiti and other mementos. Behind it stands the slurry wall, part of the foundation of the WTC that many were really worried about when going through the rubble (would it stay true?) – and is still here, as part of the museum. 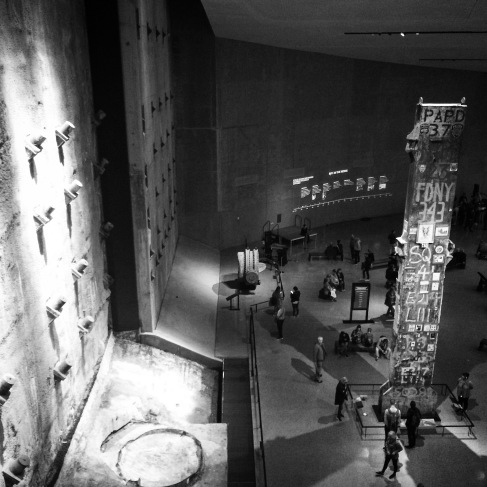 The last column and slurry wall from above

Mementos on the Last Column

Last Column and slurry wall from below

Most of the other parts of the museum are off-limits in terms of photography, but there are lots of interesting artifacts, images, videos, and audio recordings throughout. It was a very moving and thoughtful tribute.

The stairway that survived. Many survivors are around because of these stairs

On the night of September 11th, I knew I wanted to photograph the Tribute of Light, so found my way to the Brooklyn pier area, with many other photographers (but not as many as I had feared). As it rained off and on throughout the evening, the cloud cover either allowed a lot of the light to penetrate the sky, or at times blocked it almost entirely. But those lights are really powerful, and I was able to see it from almost every place I went to that night.

Rainy night for the 9/11 memorial tribute

As a final note, I went to see “Come From Away,” a musical based on the experiences of the locals (and visitors to) Gander, Newfoundland on 9/11, when 36 flights were diverted there when the US closed its airspace. It was both funny and moving at times, and rounded out the entire memorial experience for me. One thing I learned from the musical is that a piece of the WTC was gifted to Gander, and it’s the only piece that was sent outside of the U.S. One day, when I finally visit the east coast of Canada, I will find my way there.

Monuments: There are numerous memorials around the city and even individual memorials in cemeteries. The memorials are sobering and moving, the artifacts left behind are equally so.

Grounds: Accessible in all locations

Notes: If you can be in NYC for the tribute of light, I highly recommend going there at that time. When going to the museum, book your tickets in advance.