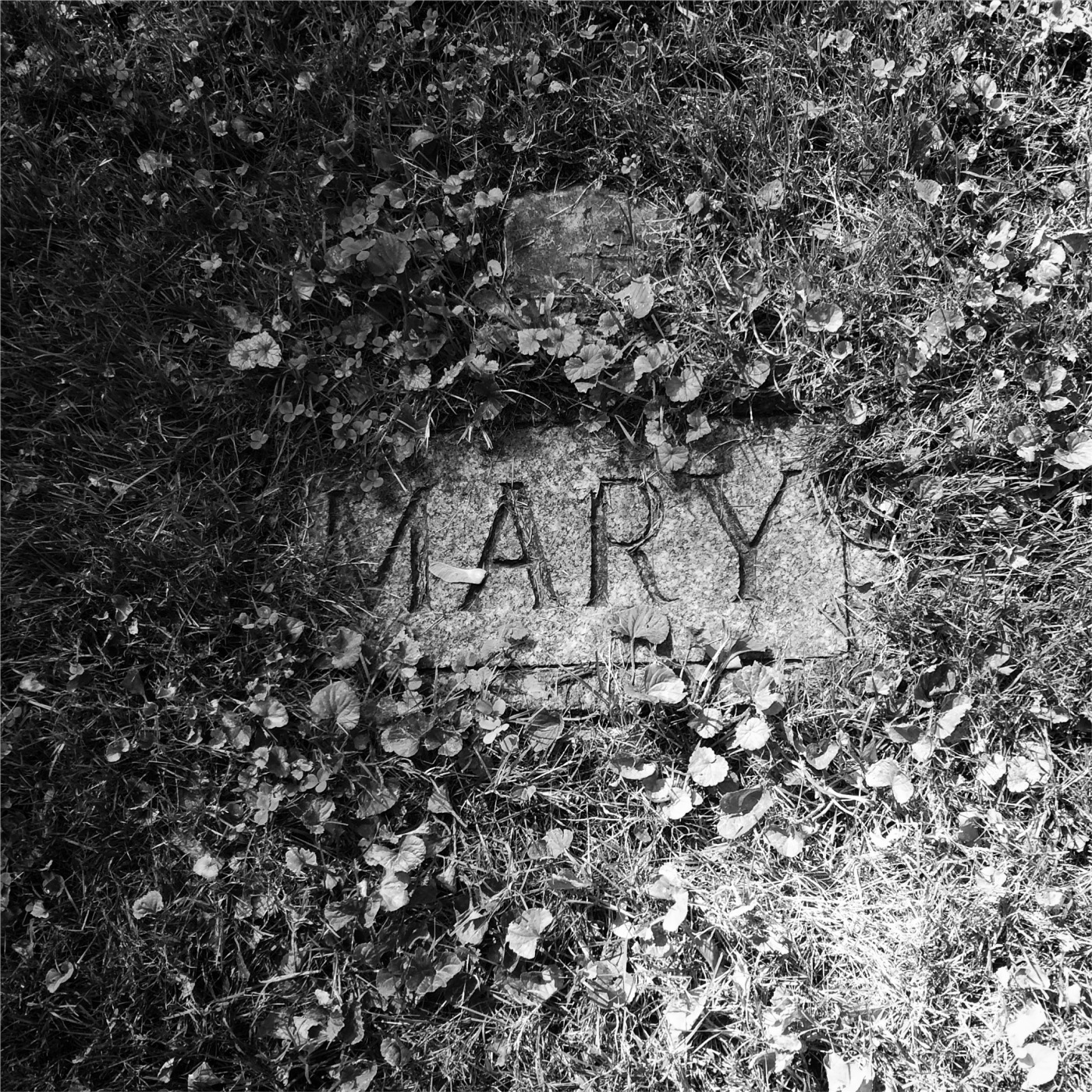 Back in 1996, I was taking a class in Public Memory as part of my History Masters, and for my major research paper I decided to focus on 19th-century Toronto cemeteries, namely Necropolis, St. James, and Mount Pleasant. In retrospect I imagine my professor could also count on some student doing cemeteries as their project every year, but for me, it provided the opportunity to really dig deeper into the somewhat distant fascination I had with cemeteries my entire life. So, after doing a lot of research (Ares, Robinson, etc.) and having some idea of what to look for, I went cemetery exploring for the first time in my life, and that first cemetery I went to was Necropolis Cemetery in Toronto.

Back in the early 19th-century, when Toronto was known as York (it changed back to its original name in 1834), burials in the city were either done in churchyards for those who belonged to one that existed at the time, and for everyone else, they were buried in a large Potter’s Field at what is now the most famous intersection in the city: Bloor and Yonge. However, as the city began to quickly expand, both the churches and the city planners realized the need for cemeteries outside of the city limits. The first of these large cemeteries that was built was the Necropolis Cemetery in 1850. The majority of the remains from Potter’s Field were reinterred there, but it also became a popular cemetery in its own right. Soon, the other two large cemeteries were built: the nearby St. James Cemetery, and the infinitely more prestigious Mount Pleasant. 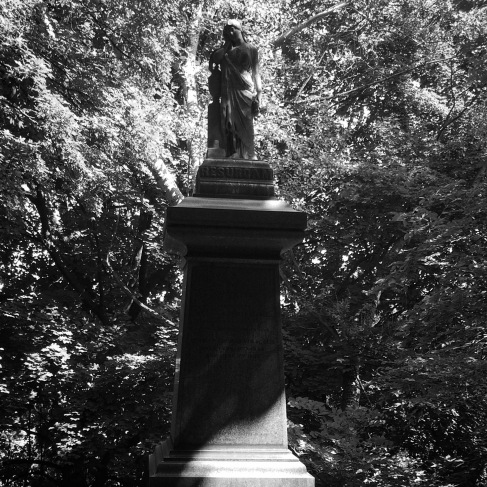 Possibly the only statue on the grounds 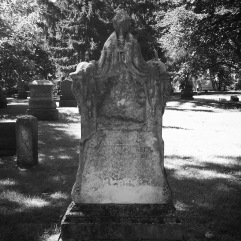 Too worn to make out

The first time I went there I was a very cautious explorer. I felt intimidated by the cemetery and was fascinated by each and every headstone. I photographed each and every variation I could find of obelisks, columns, weeping willows, and more. I was very tentative around each grave and tried my best not to step over any particular one. However, as I explored more, it became apparent that that was an impossible task – many headstones were buried flat into the ground and it was sometimes unclear which area was the burial area and which was not. On top of that, it was January, and while the ground was only lightly covered in snow, there was black ice underneath. I have to admit that I slipped more than once and on a slightly elevated knoll* I slipped and went sliding down the hill into a (larger) monument. I felt so guilty about it, and made my apologies to the surrounding area, even though of course it was an accident. However, that slip and crash has embedded itself into my memory that this time went I went to revisit it over 20 years after my first visit, I was hard-pressed to tell exactly which hillock I slipped down, due to the fact that the cemetery is pretty flat overall.

This is not Toronto’s most prestigious or interesting cemetery. It’s not as grand as the garden/rural cemeteries of Mount Auburn, Laelakj;k or Green-Wood. I remember writing in my paper that this was more of a “transitional” cemetery – something between the small church graveyard and the large garden cemetery, although of course there is no one metric to determine the latter. There are virtually no statues there (only one as far as I could find, and maybe another that has been weathered beyond recognition, but it’s hard to tell) – the majority of the monuments are short obelisks, cubic plinths?, and old slab-style gravestones that are primarily embedded in the ground (to protect them from breakage I imagine). There are a few above-ground tombs and small mausoleums, but that’s about it. However, it’s a lovely cemetery to walk around – in fact, many people were doing just that when I visited.

Monuments: A lot of ground slab-style monuments here, which I found more interesting than anything else. I only found one statue here, although a few could be considered as such but were too worn down to tell.

Grounds: Mostly flat, with nice wide paved paths to walk down. There are a lot of old trees here providing plenty of shade (and dappled light).

Visitors: Quite a few locals using the cemetery as a park/place to hang out; a few groundskeepers were hard at work too.

Notes: The chapel is interesting, if you need the bathroom it’s best to head next door to Riverdale Farm and use the facilities there.

Location: 200 Winchester Street, Toronto, across from the Riverdale Farm. Castle Frank is the nearest subway stop.