Here we are – 150 sites explored since I started this blog just over 3 years ago. 100 kind of came and went while I was travelling, and I wasn’t sure where I would be for the next (kind of) big milestone, but a work obligation led me to Himeji. Himeji is not that well-known, but it is a diversion for some tourists in Japan, often stopping for a few hours on their way from Kyoto to Hiroshima (or vice versa). It’s claim to fame is the gorgeous UNESCO World Heritage castle, Himeji-jo, which is also known as White Heron Castle. Japan used to be home to a large number of castles, but over the years many were destroyed by fire, earthquakes, or war. Quite a few have been rebuilt (for tourism) and these include some of the largest in the country – Nagano, Osaka, and Kumamoto castles included. But these are all reconstructions, in fact, there are only 12 original castles left in Japan, and Himeji-jo is one of them. However, none of them can match the beauty of Himeji-jo, nor the feeling of what it’s like to walk in a castle on wooden floors that have had thousands of feet pass over them over the centuries. It’s one of my favourite castles in the country, and I highly recommend visiting if you have the chance. 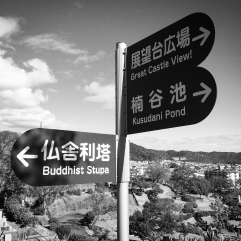 But of course this blog is about cemeteries, not castles, so it should be no surprise that, despite initial plans to visit both the castle and a cemetery today, in the end, I only had enough time for one. I went to Nagoyama Cemetery, which lies on a hill about 2 km west of the castle. In all my research about interesting cemeteries in Japan, this one has never come up, and I’m not sure why. It has one of the most important Buddhist relics in all of Japan, the ashes of Buddha himself. India’s first Prime Minister (Jawaharlal Nehru), in a gesture of friendship, gave some of Buddha’s ashes to Japan and they were enshrined in a very large stupa at this cemetery in Himeji. In any other Buddhist country this would probably be a pilgrimage site, but here in Japan it was a fairly empty (but beautiful) place to visit. 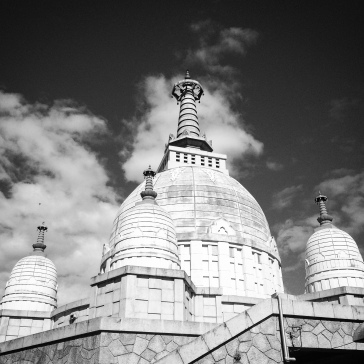 Another view of the main stupa

View from the top 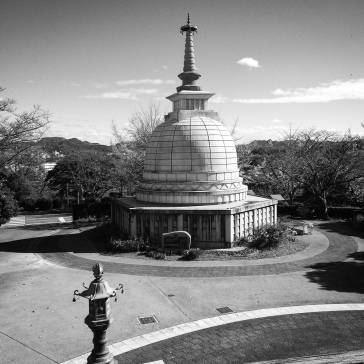 One of the four secondary stupas on the main level

View from across the road

The stupa itself lies at the very top of the hill that is surrounded by a beautifully landscaped cemetery on all sides. As you walk up the stairs you come across a pond with several fountains inside it, and benches all around for sitting and contemplating life. There are also several elephant heads spouting water into the reservoir, clearly a nod to the gifting country. The stupa itself is approached by another set of stairs and is round, like many others that I’ve seen in other parts of Asia, but not in Japan. On the main level, in the room below the stupa, are statues of Buddha’s disciples, but the doors were locked and the attendant gone when I went to go see inside. It was a little early to be closed for lunch, but that perhaps could have been why. There were four smaller stupas near this large one, and they had what looked to be prayer rooms below them, but I didn’t go in as there were people in there using them for just that purpose.

Looking down into the main cemetery 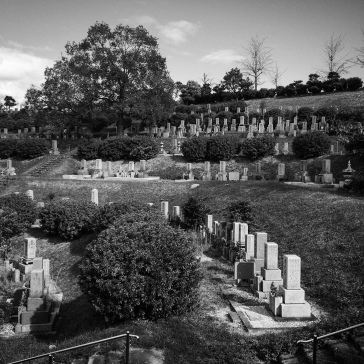 Another view of the cemetery

After I finished looking around I headed down into the main cemetery part. All of the gravestones lie in sculpted terraces that follow the slope of the hill, but there were stairs that allowed access to the different areas. Directly below the stupa was a large conical pyramid of stones. I don’t know who these are for – people with no one left to mourn them, stones taken and re-installed at this cemetery, ….(?). As I descended the stairs to go look at here I could here a traditional Japanese lament wafting through the air. I thought it was the cemetery piping music from somewhere, but as I got closer I realised it was a single (older) Japanese man who had a small device that played the music he needed to sing his laments/prayers. It was quite moving and I didn’t want to disturb him, so I stayed to the front and side of the pyramid as he sang.

Stairs to the top

Afterwards, I went back up the hill and crossed the road to the other part of the cemetery. Here there are two smaller pyramids, which I think are for Japanese soldiers who died during WWII (but it also seems to me that I read it was for soldiers in all wars going back to the Meiji period – unfortunately I can’t find that original reference). Nearby lie the graves three foreign soldiers who had been captured (and later died, in hospital, in Japan). Apparently six foreign soldiers died in the hospital – 3 were repatriated back to their respective countries, but the other three were not claimed, so they were buried here in simple graves on top of the hill, overlooking the city of Himeji and the castle in the distance (you can see it in one of the pictures below, the one below the signs). 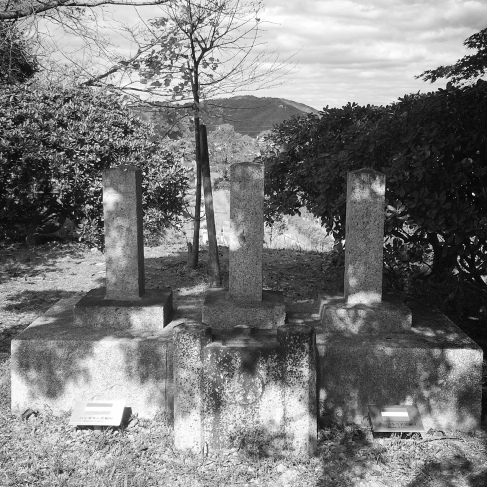 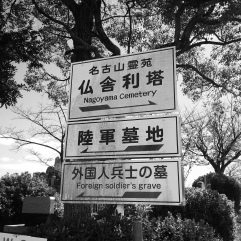 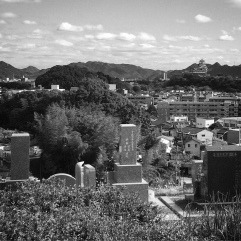 View from the newer cemetery. You can see Himeji Castle in the distance (top right). 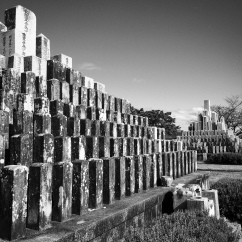 Not sure who these stones are for

Front view of the pyramids

It was a beautiful day to visit, and offered sweeping views over the surrounding area. I’m surprised that more people don’t come here, but I like it that way. It preserves the serenity of the place, making it a much more enjoyable visit. Hopefully the next time I come back here the interior will be open and I can spend a bit more time exploring the cemetery and the surrounding area, as I was limited with my time due to my work schedule. Luckily, it’s not that far from Kyoto, so I’m sure I’ll be back soon.

Monuments: The cemetery itself doesn’t stand out in any way, other than its beautiful hillside location (also a great place to come if you want to get a view of the castle). Most of the stones are newer, so they don’t have the worn, wabi-sabi aesthetic of older cemeteries. The stupa, of course, and surrounding buildings are beautiful, with lots of flourishes that you don’t really see in Japan (the fountain, the elephants, the metal lanterns, etc.).

Grounds: It’s up on a hill, and while there is accessible access (ramps and such), expect a few stairs if you really want to explore. The grounds of the cemetery were a little overgrown, but overall it was really well-kept and would be easy to explore. There are lots of benches for sitting on and the main visitor centre has toilets available.

Visitors: There were a handful of (older) Japanese visitors while I was there, mostly in groups of 2-4 people.

Notes: Bring a zoom lens (and possibly a tripod) if you want to get some alternative pictures of the castle. I would definitely come here at sunset/in the evening when then castle is lit up.

Established: Buddha’s ashes were enshrined here in 1954. The rest of the cemetery looks pretty modern but I haven’t been able to find out how old it is.

Location: 14-1 Nagoyamacho, Himeji-shi 670-0051. You can take a bus from Himeji station to Kurumasaki or Nagoyama kitaguchi stops, but I’m not sure which bus number it is as I walked there (about 30 minutes).