Nagoya is not on most tourists’ itineraries when visiting Japan, and usually for good reason. It lies in the middle of a flat plain, is the hub of big manufacturing in the country, and was very heavily bombed during the war, which destroyed a lot of old buildings. I’ve never had any real interest in the city itself, but despite that, I always have a great time whenever I visit. 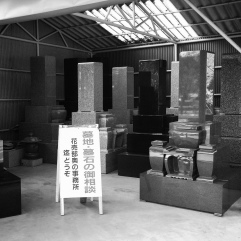 For the taphophile, there are a number of interesting cemeteries to visit if you happen to be in the city. I only had time for one on this trip, so I started with the largest: the Heiwa Koen (Peace Park) Cemetery. The park itself was dedicated to the memory of the victims of WWII and has numerous walking trails, a 17th-century pond, and over 2500 cherry trees over its 150 hectares, making it a popular spot for hanami in the spring. The cemetery makes up a substantial part of the park. Over 190,000 graves were moved here from the centre of the city to allow for rebuilding. Of course, it’s still a working cemetery (as evidenced by the maintenance workers I saw there building a new gravesite), but I don’t know the total number of internments that are currently here. 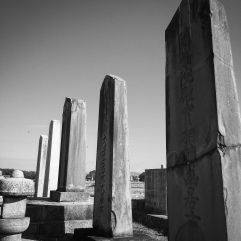 Lots of buckets and scoops throughout the cemetery for cleaning

Several mass monuments like this, not sure who they are for

The cemetery has a number of interesting monuments and statues. One OS a large tomb dedicated to those people who donated their bodies for medical research. It’s on top of a small hill. Bronze doors featuring children are at the entrance of the tomb, and a large, multifaceted sphere markers the top of the monument. I guess the sphere’s resemblance to a golf ball is too enticing to local golfers, as there are numerous signs at the top of the hill saying that any golf practicing is prohibited. I have to admit that’s a first for me in terms of cemetery prohibitions!

Memorial tomb for those who donated their bodies to science

Bronze doors of the tomb

There are a number of other memorials here, including a pyramid of jizo statues meant for the memory of aborted fetuses. Although this is a distinctive monument, I couldn’t find it either on the local cemetery maps, or by wandering over most of the grounds. I’m sure with more time I would have found it, but I had to get back into the city to catch the train back to Kyoto. However, I know I’ll be back soon – there are a number of other cemeteries I would like to visit in the city, and it’s only a 30-minute ride on the Shinkansen from Kyoto to Nagoya. 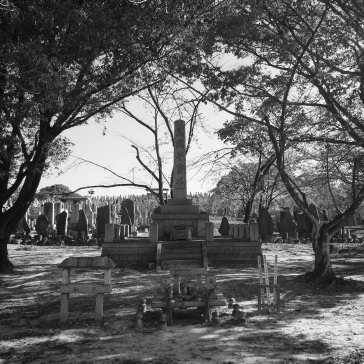 Monuments: There are a few statues, towers, and other monuments scattered through the park/cemetery. They’re not concentrated in any one place, so it does encourage you to explore a bit more.

Grounds: This is a large cemetery that extends over multiple hills in the park. You can catch a bus from the major road that runs through the park. There are a lot of trees and occasionally benches to rest on. There are toilets throughout the park, but most of them are squatters – I only found one Western style toilet near a play area at the edge of the park/cemetery.

Visitors: There were a few visitors, but given how big the cemetery is, you’ll rarely run into anyone.

Notes: Give yourself at least 2-3 hours to explore the park/cemetery properly. Spring would be a great time to visit with all the cherry trees here.

Established: Post WWII, although many graves are much older than that

Location: Heiwa Park, Nagoya. There’s a bus from Jiyūgaoka Station (Meijo line), but it’s only a 10-minute walk to the park itself.

Hours: Open daily, no closing hours. However it doesn’t appear to be lit at night.