Site 158: The Jewish Cemetery of Łódź

Back in the 19th century, the Polish city of Łódź flourished. Immigrants were invited from all over Europe, and soon the city was a mix of Polish, German, and Jewish inhabitants. The textile industry was the mainstay of the city, and many of the former mills have been converted into restaurants, galleries, and shopping centres (the most famous being Manufaktura, which had been owned by the wealthy Jewish industrialist Izrael Poznanski). Although it went into decline after WWI, it was still an important city. By 1939, there were 230,000 Jews living in the city, about a third of the population.

When the Germans occupied the city, they formed the Łódź Ghetto (aka as the Litzmannstaat Ghetto) in the northern area of the city, where most of the Jewish population lived. This ghetto was one of the largest in Europe as it was also a work camp, servicing the German military (for that reason it was one of the last to be liquidated in 1944, shortly after the Warsaw uprising). By the end of the war, only 10,000 Łódź Jews had survived the Holocaust. 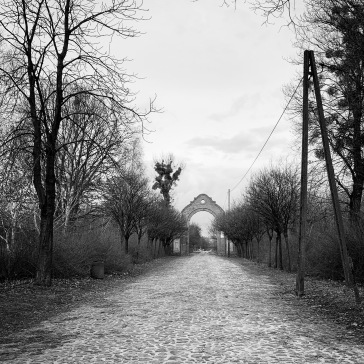 Section of the outer wall 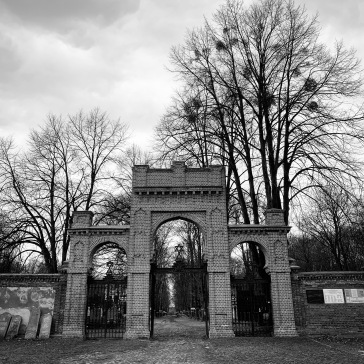 At the northern edge of the ghetto was the Łódź Cemetery. It was established in 1892 as the “new” Jewish cemetery since the older one (now gone) did not have any more room for new burials. For a time it was the largest Jewish cemetery in Europe and one of the largest in Poland. Currently it has between 180,000-230,000 burials, including the Ghetto Field, a large area in the southern part of the cemetery that holds the mass graves of the victims of the Łódź Ghetto and the Holocaust. 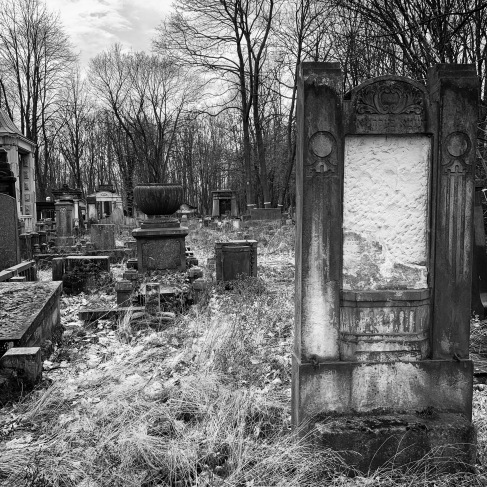 Many headstones are missing the inscriptions 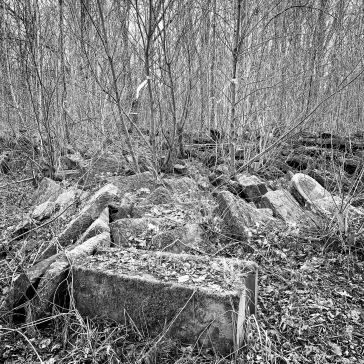 The grove of headstones

Many fallen trees are within the cemetery

I decided to come here on my first full day in Poland, on a day trip from Warsaw. I knew that Łódź, even though it is Poland’s third-largest city, did not have a lot of sites for the regular tourist, but I really wanted to see the cemetery and Radegast station (the nearest train station where many Jews were sent on transports to death camps). Being an industrial city, I knew it would have a gritty charm that I actually was looking forward to photographing (much more interesting than the cleaned-up sterile city centres and old towns of many tourist cities). What I couldn’t have planned for was the strong, cold wind that seemed to blow from every direction, nor the stinging rain that came with it. Having left my umbrella back at the apartment (not that it would have helped much), I realized that I needed to change my plans. I ended up at Manufaktura to get warm and dry over a large cup of chai, while I waited for the rain to stop. Once it did, I headed over to the cemetery. 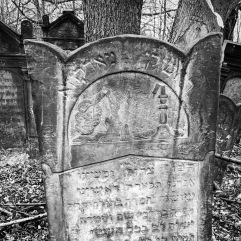 Broken candle (candles often symbolize the grave of a woman)

The cemetery was easy enough to find – the low brick wall that surrounds many a cemetery was evident from far down the street. Unfortunately, Google Maps show the entrance on the south side, and while there is a large, grand entrance there, it is only for vehicles and you cannot enter there. Instead you need to head around to the east side and walk along that wall almost to the end, where you will find a small metal door embedded in the wall. That is the entrance. It opened easily enough for me and when I went inside the three groundskeepers who were doing something with branches turned to look at me (but said nothing). I walked past the main building/office which look completely shut up, but I guess wasn’t, because soon after a stern-looking woman came out to ask me questions. I couldn’t understand her and she couldn’t understand me, but she kept poking me in the chest/shoulder saying “only one?”. I’ve never really been manhandled by a cemetery employee before, but I guess there’s a first for everything. I still don’t know what the point was – was she trying to make sure I wasn’t there to vandalize anything? Did she want an entry fee from me (possibly – I noticed the sign as I left). Anyway, after several pokes to my body I was allowed to go in but it set a negative tone for me and I felt like a very reluctant, unwelcome visitor from that point onwards.

Walking through the main gate into the cemetery proper, it became clear how big this cemetery really is – I mean, I already had some idea having walked around the wall, but it really hit me once inside. I’ve been to a few Jewish cemeteries in Europe, and regardless of whether or not they are overly crowded like Prague’s Jewish Cemetery, or spread out like in Worms, the actual cemeteries themselves tend to be quite small. Not here. It was crowded like a regular cemetery, and big. Lots of mostly oak trees, long grasses, ivy, fallen leaves and branches, and more covered the grounds. Although it had stopped raining by this point, the paths were still muddy and slippery. It’s clear that this is a cemetery that has few resources at its disposal to maintain itself. I wondered if those groundskeepers I saw at the entrance were the only ones to do the work here. Their main job appeared to be removing the fallen branches and felling fallen trees, and just that in and of itself looked like a big job here. This is definitely a place that could use an army of volunteers to help with the upkeep.

Most of the headstones here follow traditional Jewish designs. Even if the inscriptions had been lost (to time, the elements, or vandalism), most of the funerary symbols remained at the tops – books, menorahs, and broken oak trees (a first for me) seemed to be the most prevalent. Some other funerary symbols, more common in Christian cemeteries, appeared here too, like inverted torches, wreaths, and draped urns. The main walkway going down the centre of the cemetery was pretty clear, but the section to the right (or north) was extremely overgrown (as in the picture for this blog). It was very uneven and slippery, and without being able to see the ground I was walking on, I was afraid of falling and damaging the monuments, so I mostly left that section unexplored. However, the section to the left (or south) was slightly more maintained, especially around the mausoleums, so that made it a bit easier to explore.

The wealthy industrialist and philanthropist, Izrael Poznanski (mentioned above) has what is possibly the largest Jewish mausoleum in the world. You can’t miss it, it is easily seen from many points across the cemetery, other than in places where the trees are too thick. It is well-maintained and several of the individual graves were covered in stones. Apparently it also has a large mosaic, but I did not see it as I was still feeling bruised from my earlier encounter and didn’t want to do anything that would get me in trouble. There are several other, smaller mausoleums in this area too, in various states of disrepair.

Simple markers in the Ghetto field

Raised graves in the Ghetto Field

After exploring the main part of the cemetery, I headed to the Ghetto Field, where the mass graves of the Ghetto and Holocaust victims are buried. Most of the victims are labelled by a single small marker, but some of them have actual gravestones, placed there by their families. Further to the east is also a section with gravestones (unmarked). It is reminiscent of a war cemetery, and I believe that was intentional. 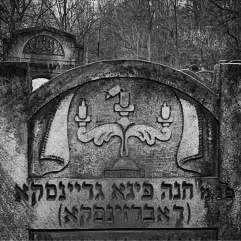 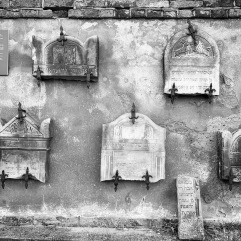 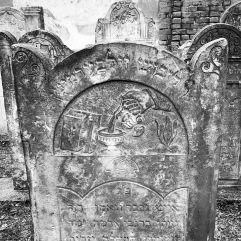 As I was leaving I took time to look at the headstones on the lapidarium, on the outside of the inner cemetery wall. A lot of these stones were really well preserved examples of the various funerary symbols you could see in the cemetery itself.

Monuments: As most Jewish cemeteries prohibit the depiction of real people (the only exception to this that I’ve seen is at the Jewish Cemetery on the Lido in Venice), most monuments are pretty standard, with a small variety of funerary symbols on the gravestones themselves. Many of the monuments were in various states of well-being – some are very new (it’s still a functioning cemetery), some are erect with the inscriptions missing, some are a jumble of pieces. The Poznanski mausoleum is definitely the most impressive structure within the cemetery. The Ghetto Field is a sobering place, even though it really has few, if any monuments.

Grounds: Extremely overgrown, muddy (when wet), and uneven. Wear good shoes that you don’t mind getting dirty while here.

Visitors: none, I was the only one here.

Notes: Try to go earlier in the day so you don’t run out of time to visit, like I did. That said, the weather was much better in the afternoon when I visited.

Location: Bracka Street. There are various bus and streetcar options to get here, but I walked from the station (about 40 minutes).