My third day in the exclusion zone started bright and sunny. Today we were headed to the Duga-1 radar array, also known as the Russian Woodpecker. It was built in 1976 as a way to detect any missles that might come over the horizon from the U.S. Now, satellite systems provide that kind of information much faster, but at the time, this was seen as a good early warning system. The array was the largest in the world at that point, but it was also to be a top secret area – anyone without clearance/caught trespassing would be shot. Due to it’s remote location in the middle of the forest, another smaller town (known as Chernobyl-2) was built to house the workers and their families. A summer camp for children was also created nearby, and officially (in the USSR) that’s what this area was known for. NATO, on the other hand, gave it the code name STEEL WORKS. But it’s most well-known for it’s nickname, the Russian Woodpecker, because of the high frequency knocking sounds it emitted, which were often picked up my amateur short-wave radio enthusiasts. The signal would often interrupt TV broadcasts, aviation, and other utility transmissions. However, despite the top secrecy and the noise, it does not appear to have worked well, and by the late 1980s it was decommissioned. Like most of the other buildings and structures in the Chernobyl Exclusion Zone, it has been left to the ravages of nature. 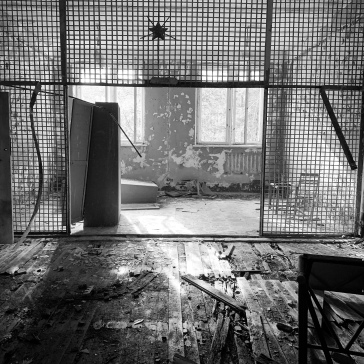 Although this is part of longer tours to the zone, it’s clear that it doesn’t see the same number of tourists as Pripyat. The dusty road was full of potholes and M often slowed down to look for wolves that often frequent the area. When we arrived at the gate the guard checked our papers and then the friendly dog that hung out there decided to accompany us to the radar. At the time, I thought we were just going to see the radar and do the town separately, so I didn’t bring my tripod as it was too sunny. But that was a mistake since all the buildings we were to explore were behind that main gate. Oh well. I think I did fairly well regardless. The first building we came across (photos above) were for the soldiers stationed there and had stockpiles of guns and other weapons (all gone now of course). Then it was time for the pièce de résistance, the array. 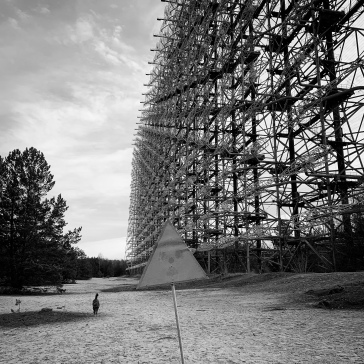 I’ve seen pictures of course, but there’s nothing like standing under this huge structure with nothing around you but thousands of trees and a dog hanging out by your side. I was so fascinated by the repetitive patterns of the array I took way too many photos of it. But it just seemed that every step gave a slightly different perspective. Luckily there were some clouds in the sky to give some definition to the sky. 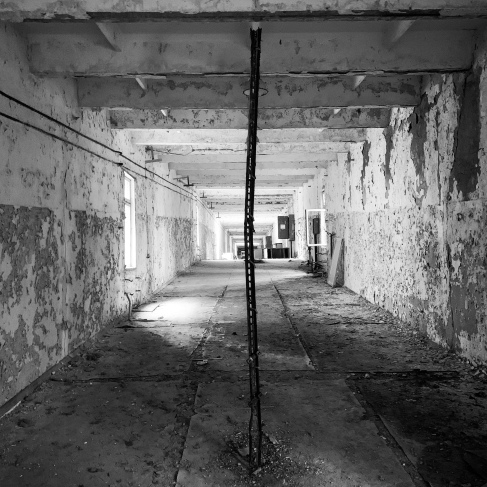 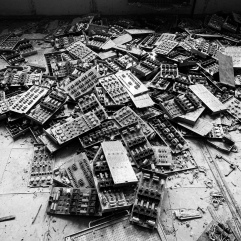 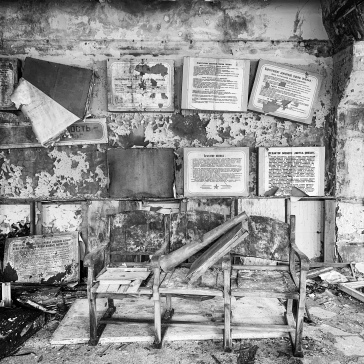 Then we went into the main headquarters where all the operational controls were. There was a large room with cages where the very large computers used to be – of course they’ve all been removed now, and all that remains are the bits and pieces that are of no value to anyone. In exploring this building it became clear that it may not be accessible for much longer, as the stairs are really starting to deteriorate. Despite that, we headed up to the roof so we could get a different perspective of the array. 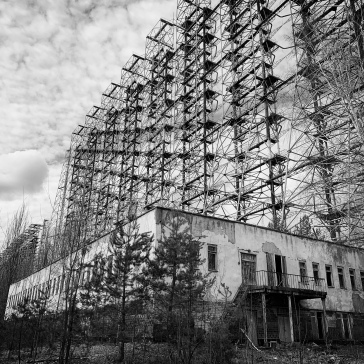 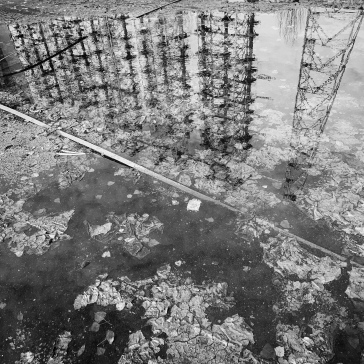 Reflection on the roof

Recent rains left large water puddles on the rooftop which made for some beautiful reflections. Trees were growing up here too, and in many places the structure below me was pretty weak – another place that will probably be too dangerous to visit in the near future. 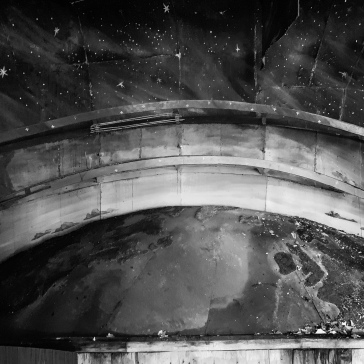 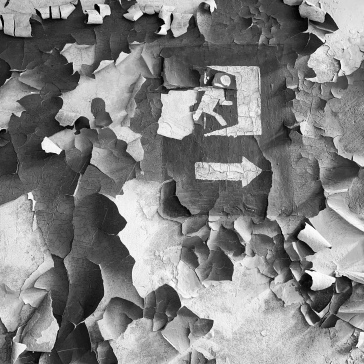 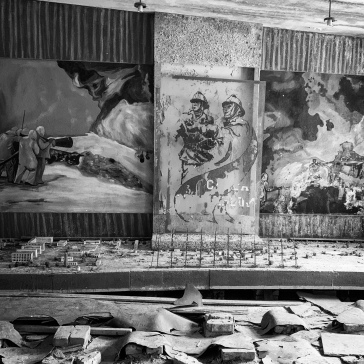 Firefighter memorial with model of the town

Back inside we were able to examine the control rooms with their 70s-era consoles. One wall had a relief of the top part of the world which I think was to represent the intended range of the array. And of course, everywhere we went, there was debris on the floor, paint peeling from the walls, and more of the familiar ruination found everywhere in the zone. 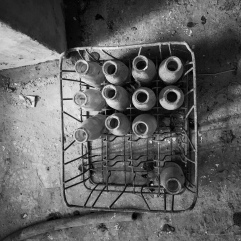 After leaving the array area we went to the local town, which, like Pripyat, was purpose built, but unlike Pripyat, was unofficial and much smaller. The first place we went to was the fire station, which had been the only one not to have sent firefighters to the Chernobyl NPP on the night of the explosion (they were not called). Inside one of the rooms was a mural dedicated to firefighters, and a small scale model of the town below. The local school was quite interesting too. The rotted floorboards of the gym were my favourite (even if they were nearly impossible to walk on/around), and there seemed to be less disturbance here (in terms of neatly place photogenic props) than in some of the more popular schools we visited. 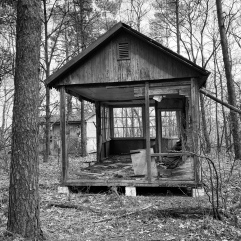 Cabin at the camp

Then we made our way to the summer camp. M told me that this place was really only visitable in the fall/winter/early spring and I could see why. Even though this was in a cleared space in the forest, after 33 years of abandonment, the trees had grown back and it would be really hard to see the buildings once the foliage was at its peak. When we first got here I thought the 30 minutes M gave us would be enough (since we were late for lunch), but despite the repetitive nature of the cabins, it was all really interesting. Every cabin had a scene from a famous book or fairy tale painted on it, and there was enough variation between the deteriorating buildings that I felt rushed to see them all. The 30 minutes went by really quickly and I felt like I only really saw a fraction of the place. I think it would be a great place to revisit. 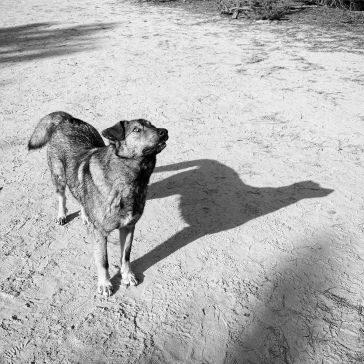 After lunch we stopped by the unfinished Reactor 5, which had been in the process of being built when the accident happened. What I find amazing is that after 33 years those cranes are still in their proper positions, having never fallen over or broken down in all that time. 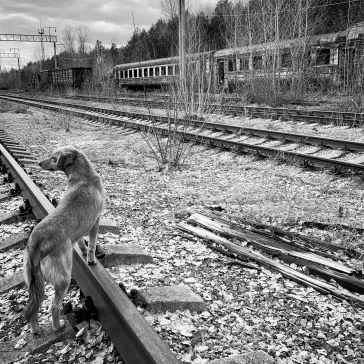 Then we headed to the Yanov railway station, which was named after the nearby village (on the outskirts of what would later be Pripyat). It was built in 1925 and was used both for freight and rail passengers. It was used to transport materials to build Pripyat and the power plant decades later. After the explosion it was heavily contaminated with radiation, and after the forced evacuations many of the residences were torn down. Further up the line there is still a working track that transports workers to and from Slavutych, about 50km away. But the main station and tracks are all but abandoned, with the rusting hulks of train carriages and engines left behind. We had some very friendly dogs join us for our explorations here, and even protected us from some more aggressive dogs further down the track. I have to say I really enjoyed having them around. 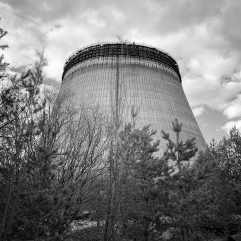 As the afternoon wore on, we then went one of the abandoned, half-built cooling towers. Getting there meant walking an uneven path of cracked concrete and vegetation growing everywhere. And dogs accompanying us of course. Once inside it was a lot easier to appreciate the scale of these massive structures. 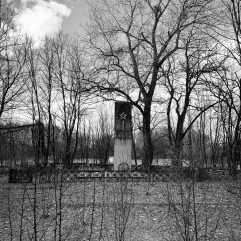 The cure and cause of all ills

Finally, we headed over to one of the former cooling ponds. In that area was a war memorial and what remains of a Zil fire engine that was used after the explosion. Nearby was a fish farm, although it became a lab to study the effects of radiation on the local fauna. There were a lot of empty cages were otters were kept, and numerous specimen jars still sitting there with their occupants inside. Some were clearly fish, others looked more like tissue samples. And even more importantly, bottles and bottles of vodka. What surprised me about the bottles was not that they were there, but that they weren’t smashed to smithereens like in so many other places.

And that, my friends, was the end of another long but fruitful day in the zone. To read about my final day, which includes a tour inside the Chernobyl Nuclear Power Plant, check out this post.