When and if a cemetery in Rome gets mentioned, it’s usually the Non-Catholic Cemetery, where Keats and Shelley are buried, that get the attention. The Verano Cemetery, on the other hand, rarely seems to make any list, and it’s a shame, for after today it is high on my list of favourite cemeteries visited.

It’s actually not that far from Rome’s Termini Station (and consequently the hotel I was staying at), and a 20-minute walk later I arrived at the large gate that is often a feature of these kinds of monumental cemeteries. As a visitor I was blessed with warm weather and sunny blue skies, but for photography purposes, it was a terrible time to visit. The high contrast that comes with such beautiful weather meant that it was difficult to capture photos of the statues that showed all their details clearly. But, as always, I had to make do with what I had, so off I went.

After first getting lost in the maze of newer mausoleums, I found myself back at the centre, in the colonnaded square that features many monumental sculptures. One of them is Monteverde’s other masterpiece, known as the “Angel of the Night.” It’s of a seated male angel and has the same excellence of skill and detail as his Resurrection Angel (the original in Staglieno). It’s the featured image of this post and is definitely one of my favourites in the cemetery. This area also featured some “sleeping beauties” in addition to many religious statues and icons.

Close up of seated angel 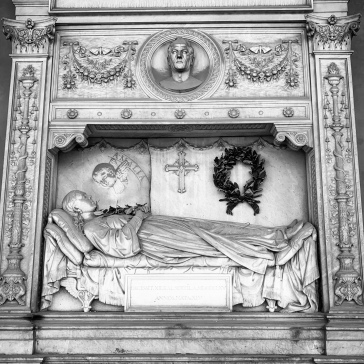 The area that surrounds this colonnade is made up of various “squares” that also have quite a number of interesting statues. To the back and to the right they are level ground, but to the left they are up on the hill, where many of the older mausoleums are as well. One thing that became clear over my visit to these areas was that there were multiple copies of iconic statues here. The first one I came across was a copy of Monteverde’s Resurrection Angel (see more below), but I also found the beautiful veiled woman in a couple of locations, as well as a resting angel. The angels were in fact not that far from each other and for a moment I thought I had been going around in circles!

Rome is also quite famous for its feral cats that are looked after by volunteers, and this cemetery was no exception. Everywhere I went I seemed to find cats just lazing around. Unlike the cats I’ve seen at other cemeteries, these ones were very laid back and friendly, especially if they thought you might have some food for them. 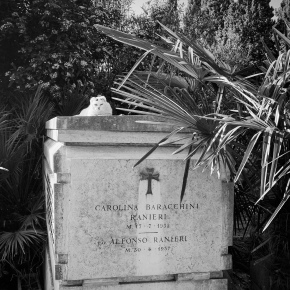 Like many other monumental cemeteries, many of the iconic statues in the cemetery feature women – some clearly of the deceased, others representative of the grieving mourner. 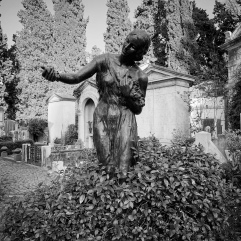 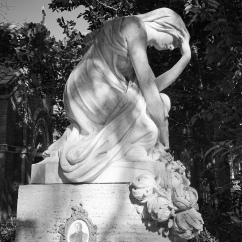 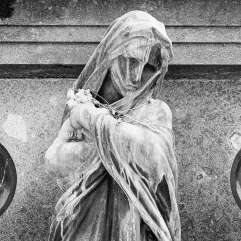 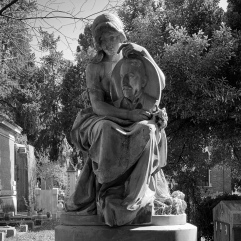 On the hillside of the cemetery I was happy to come across the Monteverde family tomb. Giulio Monteverde was a famous sculptor known for a variety of iconic statues, but perhaps his favourite was also the Resurrection Angel, which he made for the Oneto family tomb in Staglieno, for he also made a copy for his own family tomb. Although this one has some missing fingers, it is in otherwise excellent condition, and has a burnt orange wall behind the statue that really makes it stand out. I also liked that you could walk right up to the statue (it was not elevated like the one in Staglieno) which meant that it was easier to see  all the details. 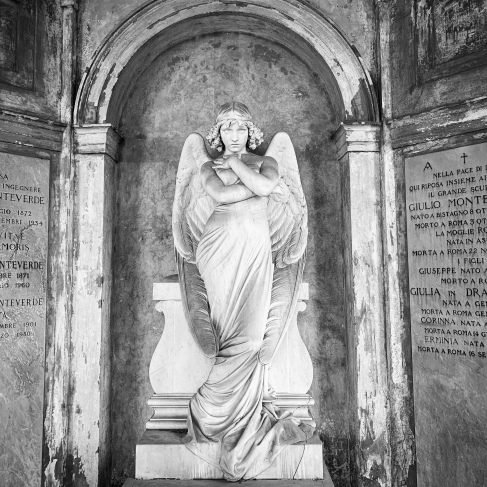 Of course there were a number of other angels as well, a few of my favourites are in the sequence below: 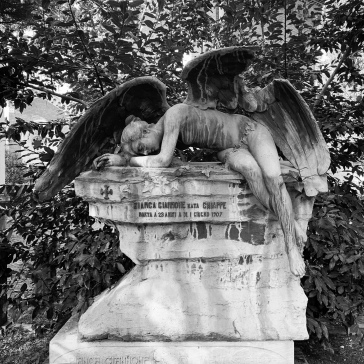 In many European cemeteries, but especially in southern Europe, you will come across enameled photos of the deceased. This cemetery was no exception, and often you would see whole generations on a family tomb. There were also pendant reliefs of the deceased, and what I thought was interesting were the painted portraits – something I’ve not really seen much of before. I also came across an older monument whose photo of the deceased was literally a photo of the deceased – a post-mortem photo, likely the only one they had of their beloved one. I can’t recall ever seeing a port-mortem photo in a cemetery before, although I’m sure they exist elsewhere.

Photo of the deceased

Overall I found this an overwhelming cemetery to visit, and one that I wasn’t wholly prepared for. Even though I spent most of the afternoon here, it wasn’t enough time. I barely saw a quarter of the cemetery and that was fours hours worth of exploration! I almost had the gates close on me as I was trying to stay as late as possible and didn’t realize they close all the gates except one in the last half hour that it is open. In any event, even though I’m not in Rome for long, if I have time I would like to go back and revisit, as there is so much more to see. 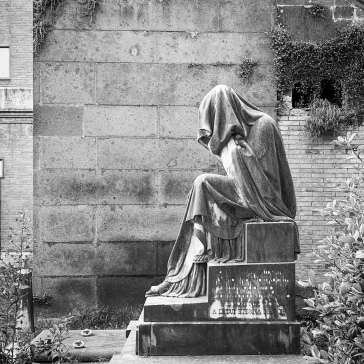 Monuments: Excellent. There are some really outstanding statues, mausoleums, and other monuments throughout the cemetery. This is one worth going back to for repeat visits.

Grounds: The cemetery is huge (83 hectares), and has both flat sections (often slightly raised from the road) and hillside sections. A lot of the main roads and paths are cobblestones, so make sure you wear some sturdy shoes while visiting. There aren’t that many places to sit and rest though. I came here at the end of March when it was in the mid-20s (Celsius) – warm but not too hot. In the summer I imagine it would be scorching, so definitely bring water as most of the water pumps here are not potable. Many trees were in bloom and the flat areas were covered in spring flowers, so this was a great time to visit. There are a lot of tall trees which provide some shade, but also a lot of dappled shadows.

Visitors: Of course there were regular visitors here to family graves, but I only came across one other (visible) tourist like myself (i.e. they had a camera). Some locals use this as a park too.

Notes: Dappled light and/or high contrast situations are a reality here. Use a flash or reflector to bring down the contrast, or come on overcast days to get more uniform light.

Established: 1807-1812, although the current cemetery is located on an ancient burial site that is over 2000 years old (early Christian catacombs were once here – Catacombs of Santa Ciriaca).

Notable Internments: sculptor Guilio Monteverde, many notable Italian artists and politicians, Clara Petacci, the mistress of Mussolini, who was shot alongside him by partisans in 1945.

Location: Piazzale del Verano, 1. There are a number of busses and tram lines that run by here, alternatively it’s an easy 20 minute from Roma Termini station.