Iconic Statue: The Angel of Grief

A female angel draped over a monument in a moment of overwhelming grief. This seems to be common motif in many a cemetery around the world, yet every version of this statue originates with the statue created by the sculptor William Story for his wife Emelyn. Officially it’s called “The Angel of Grief Weeping Over the Dismantled Altar of Life” and was erected in Rome’s Non-Catholic Cemetery in 1894. After his wife died he wasn’t really interested in sculpting anymore, but, encouraged by his children, created this grand monument to memorialize his wife. He died a year after she did and is buried with her under this beautiful statue. 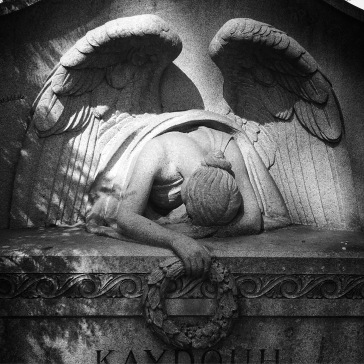 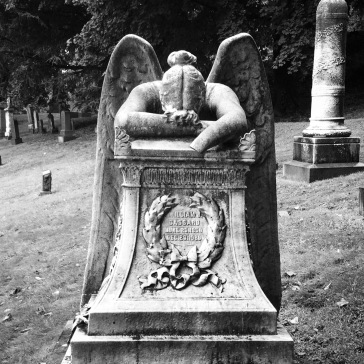 Needless to say, this appears to be one of the most copied statues in the world, as there seems to be a version (or two) in many grand (and not-so-grand) cemeteries around the world. I have seen a few copies myself, but always wanted to visit the original version of the statue, and was finally able to earlier this year when I had a couple of days in Rome on a layover back to Japan. The photos above show a few examples that I found at Green-Wood Cemetery in Brooklyn, New York, with the original by Story in the bottom right. There always seems to be slight differences – the hair, the hands (whether or not they are holding a wreath), the shape and detail in the wings. In all cases this angel represents the real grief and desolation the living feel after a loved one has passed away. I think it is clearly for this reason that this angel is so iconic.

I will, of course, continue to update this post with other examples as I come across them in my cemetery travels.