Kyrgyzstan is one of the real highlights of Central Asia. I had heard from a few people who visited how beautiful the landscapes were, and they weren’t wrong. The mountains, valleys, lakes, and animals (yaks, cows, horses, sheep, and eagles) all made for some striking views. After a few days of this (not nearly long enough) it was a bit strange to come back down to civilization and see permanent manmade structures again. On my last full day in the country we ended up at Burana Tower, a UNESCO world heritage site.

There’s not much left here, just the tower, some gravestones, and three mausoleums, all which date back to the 9th century. The tower used to stand 48m tall but over the centuries earthquakes have reduced it down to 25m. I was thankful for this as the climb up the very narrow staircase was a bit harrowing (especially the descent). It’s so narrow that people can only travel in one direction at a time (which can mean a 5-10 minute wait waiting for people to emerge from one direction so that you can go the other way). The top of the tower has some nice views all around however. 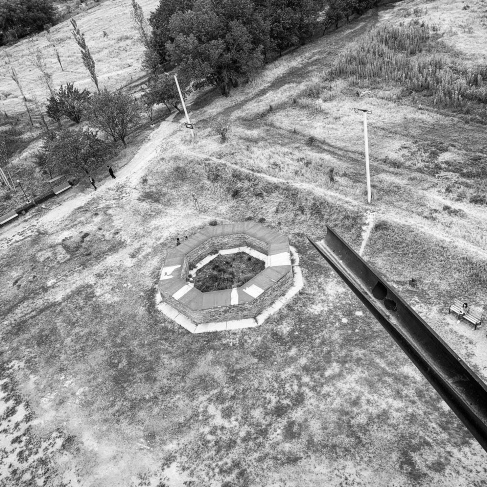 Right near the base of the tower is one mausoleum, the other two are about 100m away. There’s not much left, just some restored foundations. The No. 1 mausoleum (seen above) was the resting place for the rulers of the Kara-Khanid Khaganate (11th c.). The pictures they had on the information marker show it with pointed arches and a conical roof, although all that’s left is the ring of the base. 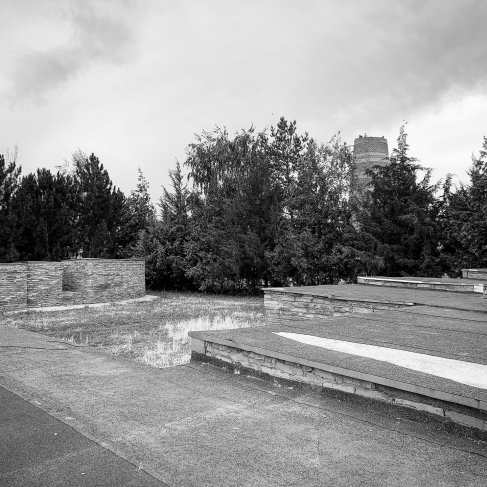 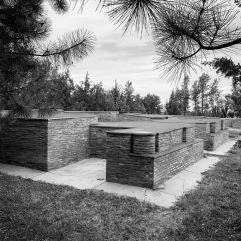 The other two mausoleums were also dedicated to the same rulers as the first, and they have an omega-symbol shape, although that was hard to see without being directly above them. 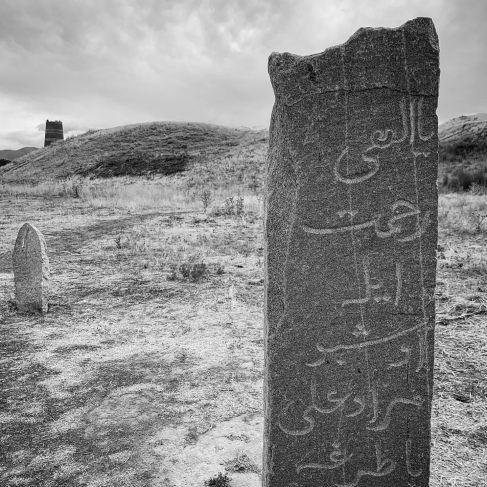 At the back section of this site lies a former cemetery, with numerous gravestones (call balbals) dating from the 14th-20th centuries, all written in Arabic, and most likely made by Turks who came through this area. Some of the stones also featured depictions of people, and others had highly stylized symbols (petroglyphs) on them (see below). Unfortunately many stones have been stolen/removed over the years, and there doesn’t seem to be any protection for the ones remaining (the small museum on site just had bits of pottery and jewellery found at the site). 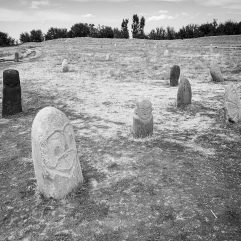 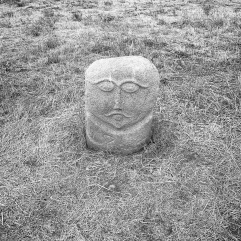 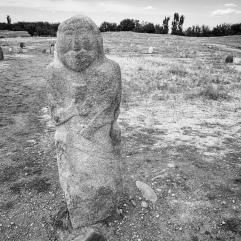 On a sunny day this is a beautiful location – any Google search will show the tower with the gorgeous Tian Shan mountain range in the back. Unfortunately, the entirety of my trip in Kyrgyzstan was one that featured a lot of rain (and sometimes snow), so I was not able to get any nice clear shots like that. Hopefully, when and if I ever go back, I’ll be blessed with better weather.

Monuments: The tower, some gravestones (balbals) and petroglyphs, 3 foundations of mausoleums

Grounds: Fairly flat, but there’s a path that will take you past all the interesting bits.

Visitors: Quite a few. This is one of Kyrgyzstan’s few iconic man-made sites to visit (the natural beauty is the real winner). We even had a wedding party come through for photos.

Notes: Although the drizzly weather sucked, I think it helped bring out the details in the stone.

Location: 80km from Bishkek, near the village of Tokmok (54 Борончиева, Tokmok, Kyrgyzstan)