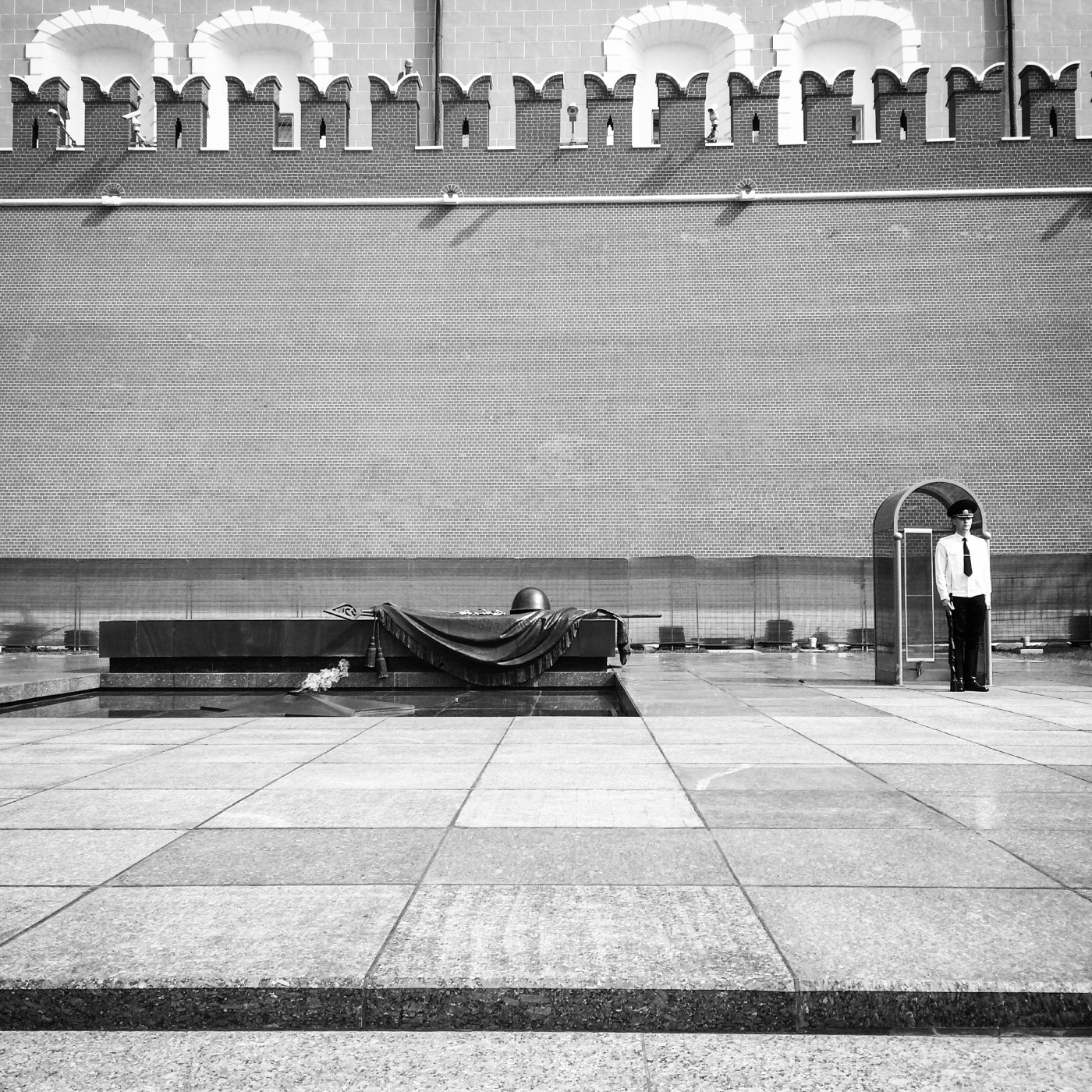 Or…Lenin’s Mausoleum, the Kremlin Wall Necropolis, and the Tomb of the Unknown Soldier. I have to admit it: I have this strange fascination for embalmed Communist leaders. Well, maybe fascination is too strong a word, but there’s something creepy and disturbing, but also kind of compelling, in seeing a human body permanently on display. I remember seeing Ho Chi Minh in his huge tomb, seemingly designed for the thousands of people that shuffle by his body on a daily basis. I remember waiting in line for a long time, well over an hour, while the Vietnamese women around me stroked my skin and commented on how pale it was (not to last long in the Vietnamese sun). Then after our bags were checked we were allowed into a very dim, very formal room that had the leader lying in state at the very centre of it. Before I knew it, I was out the door. That was 12 years ago. Yet my visit to Lenin’s Tomb was very similar. I waited in line for well over an hour, although this time no one was commenting on my skin (!). Then we had our bags checked, and we slowly but surely made our way around Lenin lying in state. The worst part was going from bright sun into a very dark tomb – by the time my eyes had properly adjusted I was almost on the other side of Lenin, ready to exit. The space around him was much less than it was for HCM, so it seemed like I was inside for 10 seconds, as opposed to a couple of minutes with the former.

It seems so anti-climatic – I’ve been wanting to visit Lenin’s Mausoleum for decades, yet I probably spent less than a minute in total inside the tomb. I have to say I feel sorry for him. Before he died in 1924 he specifically indicated that he wanted to be buried next to his mother in a cemetery in St. Petersburg, but after preserving his body and building a temporary tomb to allow visitors to see him after his death, scientists discovered that they could preserve the body indefinitely, and a more permanent tomb was built. And he’s been on display for over 90 years, despite the fact the most Russians feel that it would be appropriate to bury him once and for all.

Back into the blinding sunlight, you then walk past the Kremlin Wall Necropolis, a row of notable Russians who have their resting place just outside the Kremlin walls, the most (in)famous of course, being Stalin. The Kremlin Wall Necropolis was founded right at the beginning of the Russian Revolution, when 240 pro-Bolshevik victims were buried in mass graves just outside the wall in 1917. For a while cremated ashes were also placed in the Kremlin wall as well. There continued to be mass burials there until 1921, and then for a long time the only funerals were for state dignitaries. The last burial was in 1985 for K. Chernenko. There are 12 individual tombs here, all with a long granite block that is topped off with the head of the deceased person.

After taking a break for lunch I went to the other side of the Kremlin wall – to see the Kremlin actually, I didn’t realized it was closed on Thursdays(!) and passed by the Tomb of the Unknown Soldier. It’s a simple grave, flanked by two armed guards. This tomb is a memorial for all the Soviet soldiers of WWII. Lying buried in the grave is a soldier who died in the Battle of Moscow in 1941. There is an eternal flame burning there, in front of the tomb. Apparently it’s quite popular for wedding parties to lay flowers here, although I did not see that happen. Nor did I witness the changing of the guard. Despite the bright sunlight, it did have an air of solemnity around it.

Quality of Monuments: The memorials here are a bit different. Lenin, of course, lies inside his tomb, which is a large structure outside the Kremlin wall. The Kremlin Wall Necropolis has the graves of 12 individuals and memorial plaques in the wall itself (for cremated remains?). The Tomb of the Unknown Soldier is minimal yet classic in its design.

Cemetery Grounds: All three lay outside the Kremlin wall, just adjacent to it. The Tomb of the Unknown Soldier is officially in the Alexander Garden, which is a nice park to stroll through.

Visitors: Lenin’s Mausoleum had the most – we were in line for about an hour before we were allowed inside. The only was to see the necropolis is upon exiting the mausoleum, but most visitors stroll by quite quickly. The Tomb of the Unknown Soldier draws some visitors for photos, but not many (at least, not when I was there).

Photographer Notes: No photography is allowed inside Lenin’s Mausoleum, although pictures are allowed at all other sites along the Kremlin wall.