I wasn’t sure what to expect from Santa Maria Cemetery. It was less than a five minute walk from St. Isidro, and had the added benefit of being open later than the other cemeteries, but other than that I didn’t know much about it. It’s inside St. Isidro park, and next to a funeral home (I think), so it actually was quite busy around there, but when I stepped inside the cemetery I had it all to myself. It surprised me too – what I thought was a small cemetery turned out to be much larger than I expected, as behind every wall there seemed to another section.

Not surprisingly, there are a lot of angels in this cemetery. Many are copies of the standing winged angel holding a posey of flowers, but I was pleased to see a number of more original statues in here. It seemed that every time I turned around there was another angel waiting for me. So many had droplets of water sparkling in the rain, but I’m not sure if any of my photos were able to capture that effect

Even though the graves here are not as grand as at St. Isidore, there were many more statues. As mentioned above, angels were popular, as was Christ – either on the cross, or alone, or a bust of his head. Occasionally some non-religious statues would appear, the classic grieving female. The one at the top of this post was my favourite, as it had such rich detailing. 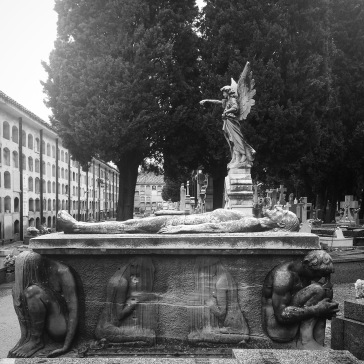 The view from the side

The most interesting grave I came across is the one pictured above. Two girls at the front and two boys at the back formed the corners, with what I am assuming is the deceased as a statue on top of the grave. 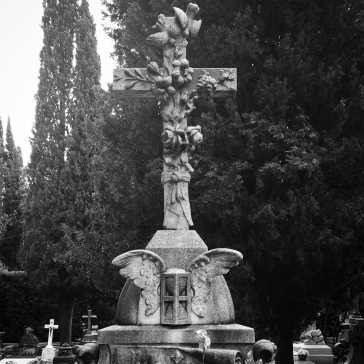 Cross with many symbols

A variety of crosses. The draped cross is very popular in both Spain and Portugal.

Being a Catholic cemetery in a Catholic country meant that there was no shortage of crosses, some quite elaborate, others more plain. In both cases however, I came across multiple copies of the same monuments.

Overall I have to say I was really pleased to have visited this cemetery, and would love to come back on a less drizzly day when the light is a little better.

Monuments: A fair number of interesting statues here. There are the big family mausoleums here, but it was still really interesting.

Grounds: The ground is mostly packed dirt and moss, so it was pretty wet and muddy when I visited – I slipped a few times but luckily never fell. There are quite a number of trees here, and statues among them, making them quite dark to photograph.

Visitors: None while I was here (about an hour)

Notes: Much as I complain about the rain, I love wet monuments – I feel you get a lot more detail than when they are dry. However, with the trees it can get quite dark in some places.