I decided to do a day trip out of Barcelona but had a hard time deciding where to go. Girona, Figueres, Montserrat, and Stiges tend to be the most popular places, but by this stage in my travels my body was like “enough!” – which meant that by the time I actually got going it was well past noon. With half the day gone already (since many places close from 2-5) I thought I would go to a couple of cemeteries instead, the one in Vilafranca del Penedès, and then go to Stiges from there. But in the end I only saw the former, as I didn’t have enough time to get to Stiges before the cemetery closed.

Now you, probably like me, have never heard of Vilafranca del Penedès before. But it’s cemetery is listed on the Association of Significant Cemeteries in Europe’ website (a great resource) so I thought I would chance it. The town itself is famous for it’s wine culture, and there are a few minor sites in town worth visiting (although I didn’t). Instead, I headed straight to the cemetery, which is about a 15-minute walk from the station. 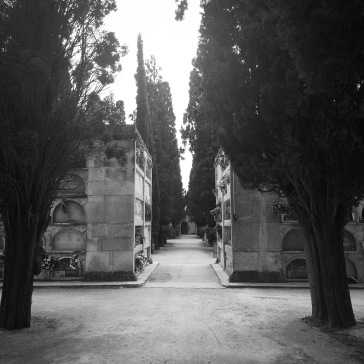 View from the old section towards the new

For those who died during the Spanish civil war

The cemetery itself is laid out like a grid, and is very well-maintained, which makes it easy to get around. The main entrance opens to the older part of the cemetery, and this is the part that has the beautiful statues and monuments. The newer part of the cemetery mostly consists of wall niches, but there are a few larger monuments and some statues there too. And of course, like many cemeteries, there were a few resident cats as well. 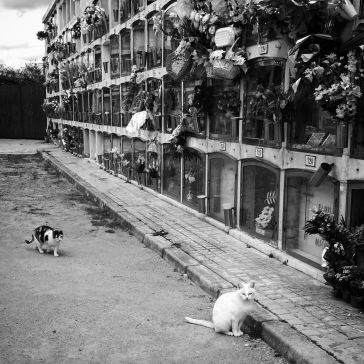 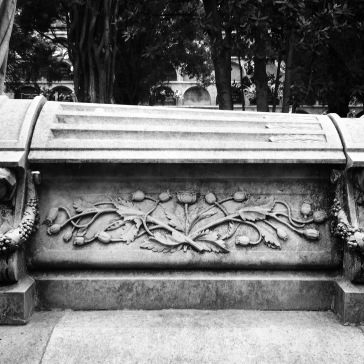 For such a small cemetery (compared to its siblings in Barcelona) it did have some interesting statues and monumental tombs. If you are ever out in this area, it is well worth a visit. 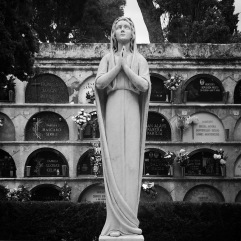 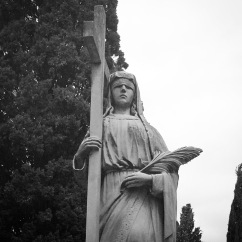 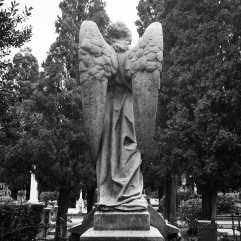 Monuments: There are quite a number of interesting graves and statues here. The grounds are not overcrowded, so it’s easy to get a good view from all angles on most of them. Some well-known architects, such as Santiago Güell, August Font and Antoni Pons designed some of the larger monuments here.

Grounds: Flat, well-maintained paths make it easy to get around. There are a few stairs that go into the newer sections.

Visitors: There was one mourner cleaning a grave in the newer section when I was here, but otherwise I had the place to myself.