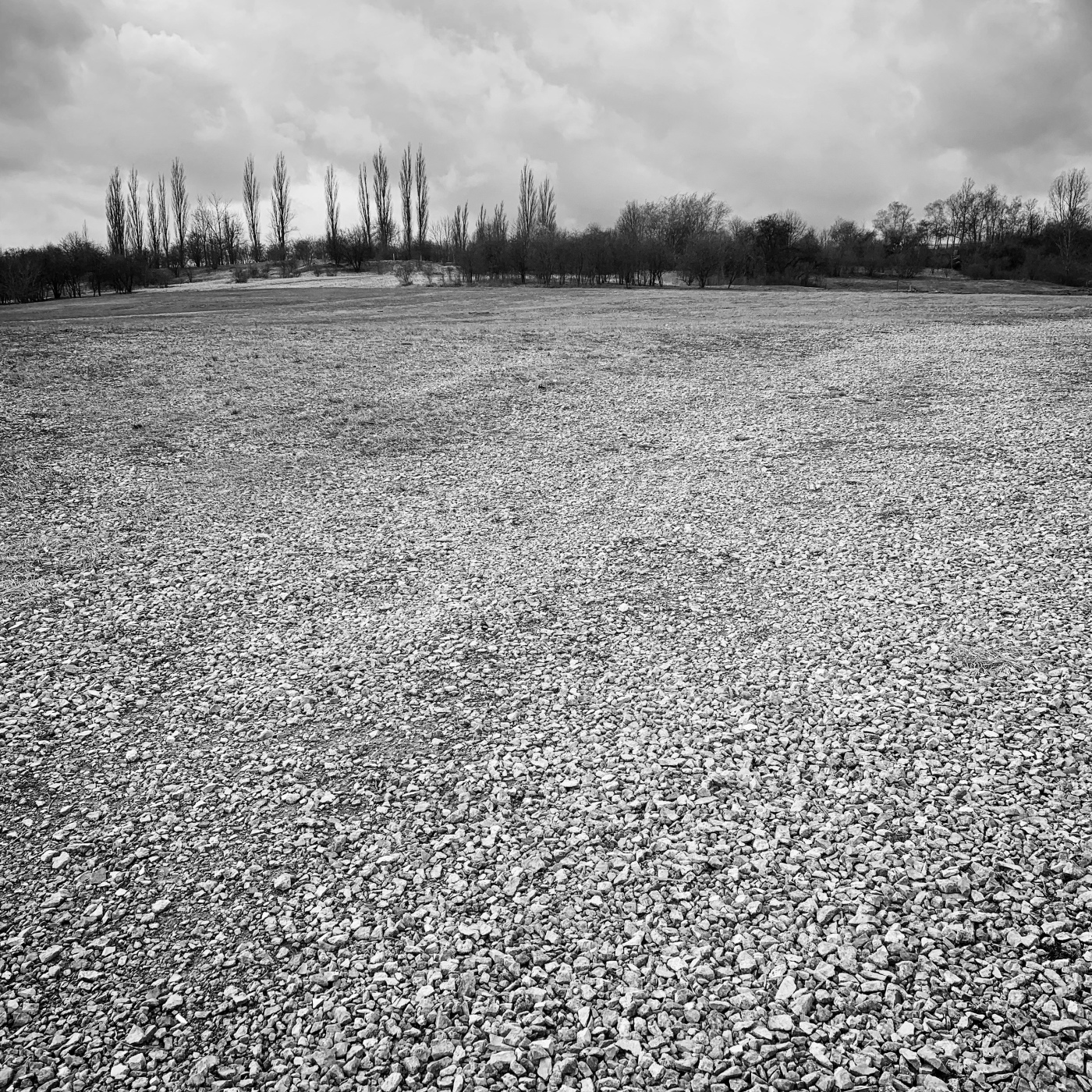 Today I went to Oskar Schindler’s old enamelware factory that’s now a museum. It was by far the best museum that I’ve been to so far on this trip. The exhibits, explanations, (real) photos, all worked together to give a snapshot into what was life was like in Warsaw just prior to the Nazi invasion on September 1, 1939. As part of the exhibit, there was some mention of the nearby labour camp at Płaszów, where most Jews were resettled after the liquidation of the ghetto. It was here that I went to after my visit.

Fragment of the ghetto wall. The gravestone imagery was on purpose 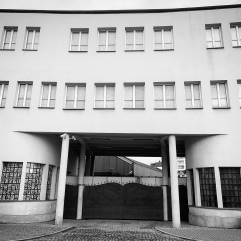 Unlike the museum (where I had to wait 30 minutes in line to get a ticket), and even Auschwitz, which was relatively quick to get in, despite the crowds, Płaszów had none of these issues. This was a forced labour/concentration camp that was built over a Jewish cemetery near a limestone quarry, and although life goes on all around it, it’s still there. Only a few buildings remain, but there are ruins in some places, and memorials to people who died there scattered throughout the grounds. And the grounds are extensive. You could probably spend the better part of a day exploring this entire area, and you would have it mostly to yourself. When I was here I only came across a few locals, and one other tourist at the main memorial. It was a far different atmosphere to the other camps I visited with multiple school and tourist groups at every turn. 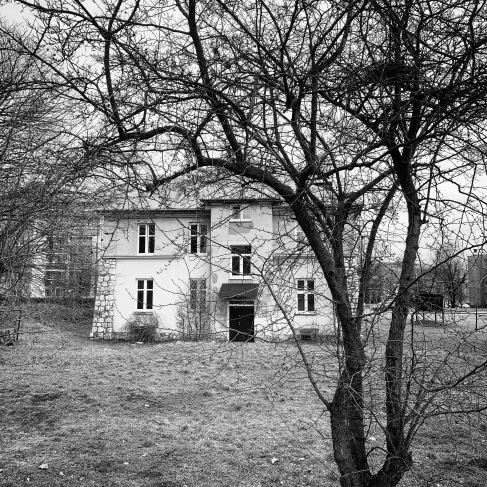 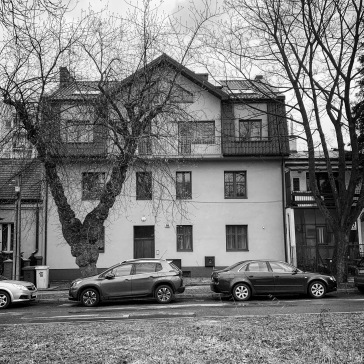 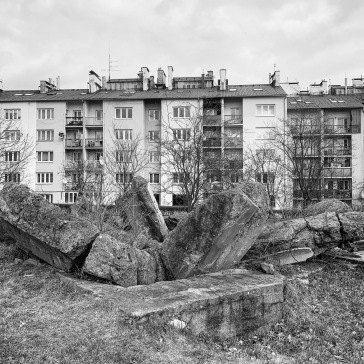 Soviet-era apartment blocks next to the camp. The ruins of Jewish funeral parlour are in the foreground.

Even before you get to the main entrance, there are signs of what used to be here: former storehouses and other outbuildings, completely abandoned and in ruins. Also along the same street is what use to the Guardhouse and Officers Club House, where Amon Göth lived briefly before it was given over to the officers. The Red House, where Göth did live, and is now a private residence, is on an adjoining street, but I did not see it on this trip. What I also found interesting was the row of very colourful Soviet-era apartment blocks that are directly across from this former camp. As you enter the camp it is clear that there is one building left on site, and that is the Grey House, which used to be an administrative and residential building for the Jewish cemetery that used to be here. When the SS came, they used it for the same purposes, although it also held confinement cells that were used to torture and murder prisoners – nobody who went there ever came back out alive. I believe there are plans to turn the building into a museum, but for now it remains closed.

After visiting multiple camps on this trip, and (re)-watching movies and documentaries about the Holocaust, it seems to me that each place was terrible in its own way. Auschwitz was run by Rudolf Höss, a man who seemed indifferent to all the suffering and murders going on around him (his family lived at the camp and seemed to have a happy life there). Over a million people died at his camp. He had a job to do and he did it. He wasn’t cruel in the same way the Amon Göth, the commandant of Płaszów was. Göth seemed to really enjoy torturing and killing the Jews in the camp, and it’s only when his superiors exercised their powers did he curb his sadistic tendencies. Like Höss, he was hanged for his crimes against humanity in 1946. Of course, I’ve read about both these men, but I have to admit that Ralph Fiennes portrayal of Göth in Schindler’s List is fixed in my mind about what he was really like (even if certain details from the movie were not correct – for example, his “villa” did not overlook the camp, so he did not shoot people from his balcony as seen in the movie – the Grey House was used as the inspiration for his villa in the movie). 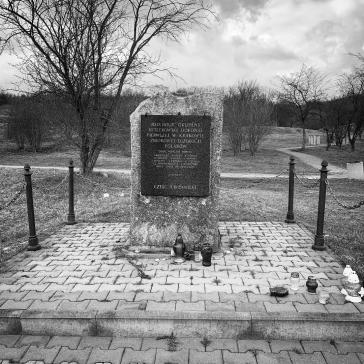 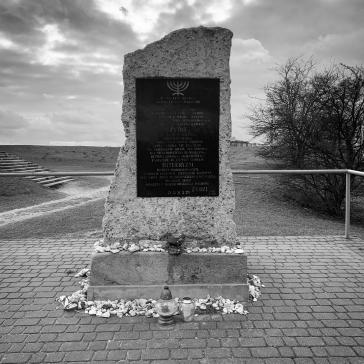 The former camp has large signboards in various areas where barracks or workhouses were located. They give some explanations about what happened there, with a quote from someone who was there in that place. The large flat area where roll call (and executions) were held every day, other execution sites (often in places with deep ditches – something that reminded me of the Killing Fields in Cambodia. Two of these places are particularly poignant – the first I came across was C Dołek, where camp and other political prisoners were murdered en masse – around 8000 people is the estimate. This site is now marked by a large memorial called “The Monument of Torn-Out Hearts”, and has five figures which represent the five countries the victims came from. Their bodies are being crushed from the massive block they hold above their heads, meant to show the abrupt end to their lives, but I think it’s also an allusion to the back-breaking work that killed many others in the limestone quarry nearby. 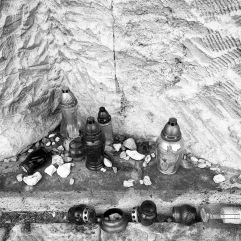 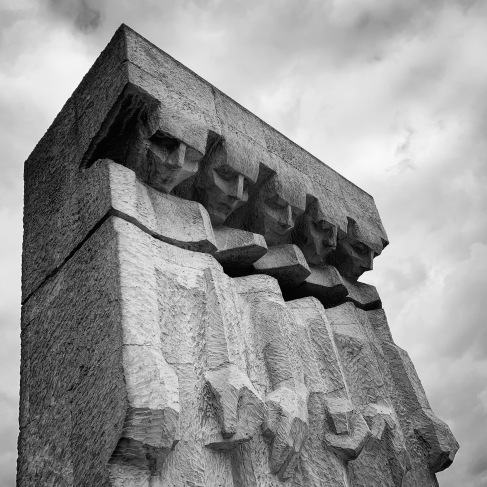 The Memorial of Torn-Out Hearts

The other place was Hujowa Górka (Prick’s Hill) – a huge pit where victims were shot in large groups and then stacked in layers and sprinkled with dirt and lime, it is now marked with a cross and barbed wire, and like C Dolek, there are large pits all around it. If you’ve seen Schindler’s List, there is a terrible scene where the prisoners are disinterring bodies and burning them, this was done because the Soviet army was approaching, and the Nazis needed to get rid of the evidence of their crimes. So the mass graves from these two execution sites were dug up and the remains burned (this took 2 months), apparently 17 truck-loads of ashes were spread over the grounds. Unfortunately, the information panels at these sites give very little details about what happened there, I had to find out more through doing my own research.

Overall it was quite a sobering experience walking around here, but I’m glad I was able to see it, even though I did not see everything – like the quarry or the remains of the Jewish cemetery. I thought it provided a good counterpoint to the Schindler Museum – one place that had, in the end, helped hundreds of Jews survive the war (Schindler offered medical care, larger portions of food, shorter work days, etc.), and the other where thousands suffered on a daily basis, and who many met their end there.

Location: Near Krakus Mound and Liban Quarry. It’s a 20-30 minute walk from the Schindler museum, but you could take any number of tram lines down Wielicka Street to get there.