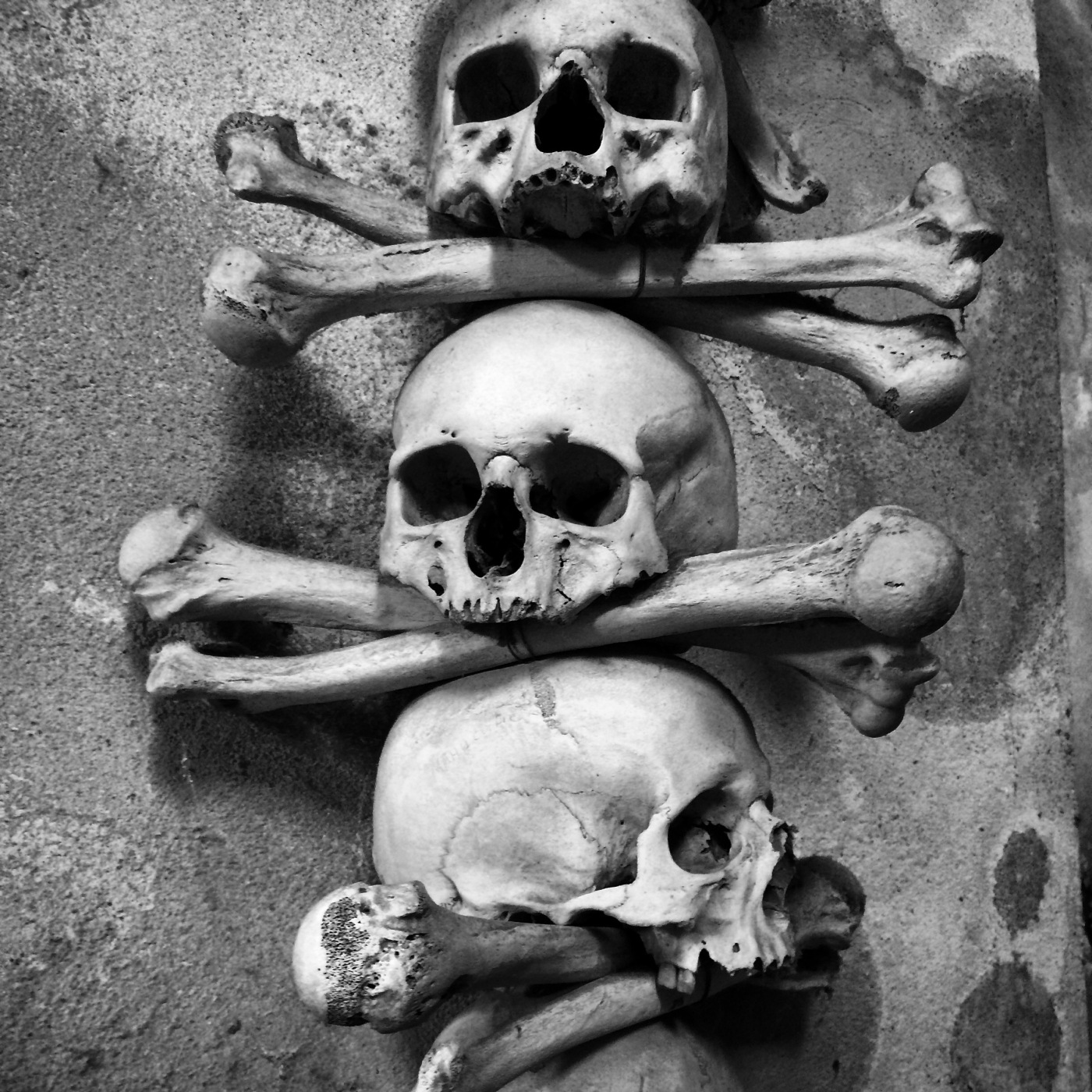 If you’ve been to Prague then you have probably heard about the ossuary in Kutna Hora, about an hour’s train ride out of Prague. The history of this site goes way back*. A monastery was built in 1142, and in 1278 the abbot of the monastery brought back some soil from Golgotha and spread it over the cemetery, thus creating a popular place to be buried in the Middle Ages. Wars and the plague meant that the cemetery had to be expanded due to the thousands of burials there, and by 1400 the lower chapel of the church was used as an ossuary for the bones they discovered when expanding the cemetery. By 1870 the Schwarzenberg family asked a local woodcutter to do something with all the bones there. What he ended up doing belied anyone’s expectations. A chandelier featuring every bone of the human body, a coat of

arms, and more. It’s not a big church, but it is impressive. I’ve certainly never seen anything like it before.  All the bones there certainly puts into perspective what the end will look like for many of us – after the flesh decays, all that’ll be left will be bones, and then, eventually, dust.

There’s a small cemetery that surrounds the church – I guess it’s a far cry from what it must have looked like in the Middle Ages. Although it’s small, it does look like it’s older, but many of the headstones are new – even for older burials, which makes me think they’re replacements. I’ve seen this in many cemeteries, including the small one in my hometown. There are a few statues, but the cemetery itself not currently very atmospheric with the blue tarps and scaffolding surrounding it (I guess restoration of the church is going on now). Still, how many churches have cemeteries surrounding them? It’s not something I’ve seen very often.

Quality of Monuments: There are a few statues in the cemetery, but the real star is the ossuary itself. The way the bones have been organized and placed together is really astounding.

Cemetery Grounds: The church and cemetery are quite small, easily visited within a 30-minute window.

Visitors: Lots. The Sedlec Ossuary attracts some 200,000 visitors a year, who probably come up to Kutna Hora for a day trip from Prague. There were quite a lot of people in the chapel, but it was not a problem in terms of looking and photographing things.

Photographer notes: the light in the chapel is quite low, film is not an option unless you push it past 3200. I used my iPhone instead and it worked just fine in there.

Location: Kutna Hora, about an hour-long train ride outside of Prague. You can take the #1 bus from the train station to the church, or its about a 15-minute walk. If you want to see the other sites in Kutna Hora you’ll have to take the bus or the train to the centre.