Down in the heart of Salzburg lies its oldest cemetery, Peterfriedhof. It lies at the base of the cliff on which Holhensalzburg Castle sits. Despite (or because of) the fact that there are numerous major attractions all around, this cemetery is popular with visitors to Salzburg, as evidenced by my time there. Even though it is not that large of a cemetery, it was filled with tourists. Most of them, however, seemed to be just passing through.

This cemetery is definitely one of the oldest I have visited, as it was established in 700 CE, although there may have been burials at this site even before that. There are catacombs here too (or were) but I did not visit them at the time for two reasons – one, I forgot that this was a part of the cemetery, and two, my back and feet were killing me by this point after exploring Salzburg on foot all day. The cemetery was closed to burials in the late 1800s but reopened in the 1930s at the request of the monks there, to prevent the cemetery from falling into even more disrepair. So there are some pretty old graves here, as well as some newer ones.

The cemetery itself sits on a small hill, which gives it a nice atmosphere for exploring. The grander tombs follow the wall of the cemetery up and around the hill. There are a few interesting statues here, and of course, the old inscriptions on the old tombs are always fascinating to see and read. I sometimes wonder if future generations will be as interested in our sleek squarish granite gravestone markers with mostly just the basic information (name, date of birth, date of death) on them. Then again, maybe in the future there will be no cemeteries (no room for them) so anything that’s left over will be of interest to them. 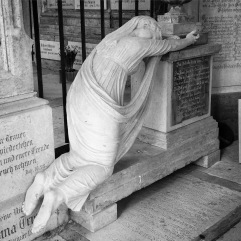 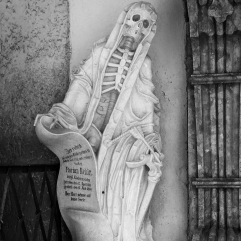 Cemetery Grounds: Not very large – the grounds are hemmed in by buildings on all sides. There’s a very small hill but the main paths are easy to navigate around. If you are interested in photographing the monuments on the hill it can be a little difficult due to the incline and how the monuments are set up.

Visitors: Quite a few, but most are just passing through.

Photographer notes: I went on an overcast day so didn’t have to worry about the light so much (although it did create some dim shadows along the wall – not a problem for digital users).